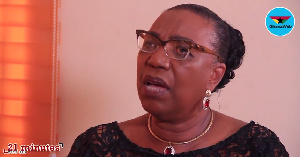 Former Minister of Education Betty Mould-Iddrisu has taken exception to the statements spued by the Communications Director of the New Patriotic Party (NPP) in reaction to the nomination of Professor Naana Jane Opoku-Agyemang as Vice Presidential Candidate for the National Democratic Congress (NDC).

She told Berla Mundi on TV3’s New Day on Tuesday, July 7 that she was taken aback by the comments made by Yaw Buaben Asamoa.

“I was surprised,” she stated, claiming she did not expect that to come out from the lawyer and law maker.

Moments after John Dramani Mahama’s nomination of Prof Opoku-Agyemang as his running mate was unanimously accepted by the National Executive Council (NEC) and the Council of Elders and a subsequent announcement made by NDC’s National Communications Officer Sammy Gyamfi, Mr Buaben Asamoa addressed journalists, pointing out why the Mahama-Opoku-Agyemang ticket will not be a threat to the Akufo-Addo-Bawumia ticket.

He concluded that “the choice of Prof Jane Naana Opoku-Agyeman by Mr John Dramani Mahama is a clear indication that he does not take the Ghanaian electorate seriously”.

This, the former Attorney General, did not take kindly to, demanding an immediate retraction from the Adentan Constituency Member of Parliament.

“I will call upon him to retract his statement.”

She said these are some of the very reasons why women have been laid back in the political landscape, saying when you are woman and you climb up any endeavour, naysayers spin so many stories around your success.

She admitted that this sometimes even happens within the NDC.

“The women of our party have been extremely resilient and have sometimes faced turmoil.”

She emphasized that all within the NDC are “proud” and “elated” about Prof Opoku-Agyemang’s nomination and she is an ideal role model for many.

“We have an incoming vice president that we can be proud of.”

List of female presidential running mates in Ghana since 1992