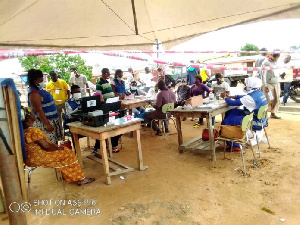 Two members of the opposition National Democratic Congress ( NDC) have been arrested in the Sekyere Afram Plains constituency of the Ashanti region for allegedly challenging a non-resident from registering in the ongoing voter’s registration exercise in the area.

The two are currently behind bars at the Drobonso police and are scheduled for court on Wednesday. The law permits residents of a particular constituency to register in that constituency for the purpose of voting.

Starr News’ Isaac Bediako Justice reports attempts by the Member of Parliament for the area Alex Adomako to secure them bail have failed.

Reports say some members in the community are massing up to besiege the police station where the suspects are being detained.

Speaking to Starr News at the Bagabaga demonstration center in the Sagnarigu constituency, Mr. Yoosa Bonga said that his tour around the various centres indicate there is peace and calm.

Related Topics:VOTER REGISTER
Up Next