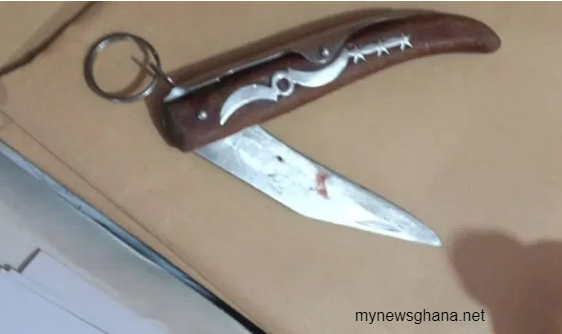 The 19-year-old National Identification applicant who stabbed colleague in Lower Manya Krobo Municipality of the Eastern Region is being processed for court.

The Odumase Krobo Police explained that, on Monday, June 29,2020, an NIA field officer -Robert Tetteh Dapaah, stationed at  Asitey a suburb of Odumase-Krobo came to the station and reported that whiles distributing Ghana Cards at Asitey Presby the young man stormed stabbed victim Tamatey Hanson, 25 years with a knife on the left side of his stomach.

Police immediately accompanied the Complainant to the scene of the crime and arrested the suspect Nicholas Partey, 19, who allegedly committed the crime together with the exhibit knife to the police station to aid with investigations.

The Police say Scene investigations showed that the suspect and victim were all at the centre to collect their Ghana Card and without any act of provocation the suspect pulled a knife and stabbed the victim.

The victim was hurried to the nearest Government hospital for treatment where he has been admitted.

Many applicants massed up at the registration Center to collect their Ghana Cards to qualify them to partake in the Voters’ registration exercise but chaos broke out when some NIA officials were allegedly taking monies from applicants before issued their cards without joining the long queues.

The confusions led to the stabbing by the suspect who was not happy that the victim was interfering.