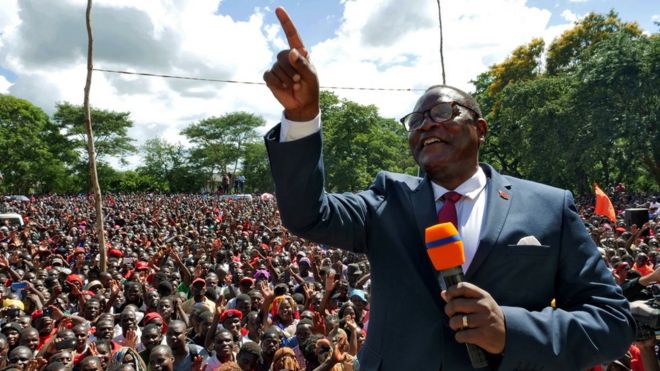 In the unmistakable cadence of a preacher, Malawi’s new President, Lazarus Chakwera, appealed for unity in his country shortly after he was sworn in on Sunday.

The day of the week seemed fitting as the former head of the Malawi Assemblies of God, one of the largest Christian denominations in the country, treated the stage like a pulpit to inspire fervour with his words.

The country is fractured after a divisive 13 months following the disputed 2019 election, the result of which was cancelled by the courts.

Speaking in a style and accent that had hints of US civil rights leader Martin Luther King, President Chakwera talked about the dream “that binds us together [which] is for us to enjoy shared prosperity, not just freedom”. 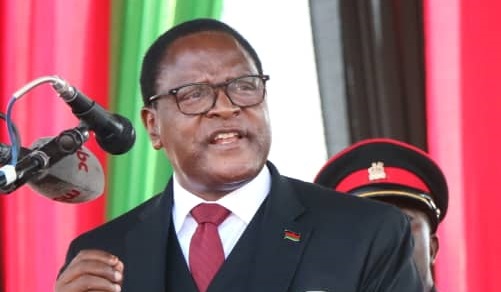 But he then said it was no good just having a dream.

“The time has come for us to go beyond dreaming.

“We all must wake up because this is a time to arise from slumber and make our dream come true.”

Mr Chakwera is a man of God in a deeply religious country.

The 65-year-old emerged as leader of the Malawi Congress Party in 2013 without having any previous political experience.

He came to the job after leading the Assemblies of God for 24 years, but admitted, when he was first running for president in 2014, that making the decision to become a politician was not easy.

“I had to argue with God over a direction in life that didn’t seem natural to me,” he said in a video published by St Andrew’s Presbyterian Church in California.

But after a lot of discussion “God was saying that: ‘I’m extending your ministry so that you’re able to pastor a whole nation'”.

In another interview, in 2017, he said that in the conversations with God he turned to chapter three of the book of Exodus in the Bible, in which God appears to Moses and says he should lead the Israelites out of Egypt.

This showed him how a leader can address both the spiritual and the social needs of the people, his adviser Sean Kampondeni told the BBC.

But he does not want to turn Malawi into a theocracy and neither does he want to proselytise, he added.

“The president believes that government is something that God subscribes to in nations in order to bring about order and progress in society, for the flourishing of human beings,” Mr Kampondeni explained.

“In Malawi, he feels that the government institutions have been deliberately crippled over the last 25 years to not provide that service and he is there as someone who is offering themself to do that.”

Standing at the apex of power and addressing the nation on Sunday, Mr Chakwera has come a long way from the boy who grew up in a village outside the capital, Lilongwe, who was, by his own admission, crippled by shyness.

The son of a preacher and evangelist who established several churches, his career as a pastor may have already seemed mapped out.

But at his prestigious secondary school, where he learned his accent by mimicking an American teacher, he initially had ambitions to be a doctor.

He thought that by being a medic he would not have to talk to large numbers of people, he told journalist Joab Chakhaza in an interview in 2017.

But during his education he says he “met God” and “began to redirect my life towards ministry”.

The father of four now wants to take that energy and vision and put it into running a country.

To those who think that there is a big difference between the lofty aims of spiritual leadership and the often low skulduggery of politics, Mr Chakwera’s adviser said the president was well aware of how to be political.

“Anybody who understands the political process and the journey to the presidency – the politics does not begin when you enter office,” Mr Kampondeni told the BBC.

“You have to do a lot of politics even just to enter public office.”

But, he said, the president’s approach will be different and he will not treat it like a dirty game.

He will now have to use his skill to bring the country together.

Addressing the nation and not just the crowds of jubilant supporters in Lilongwe, Mr Chakwera said that those who did not vote for him may view his presidency with “fear and grief”.

But he tried to reassure them.

“This new Malawi is a home for you too and so long as I am its president, it will be a home in which you too will prosper.”

The president’s defeat of the incumbent, Peter Mutharika, was so overwhelming, with 59% of the vote, that initially many will be prepared to give him the benefit of the doubt, journalist Chakhaza told the BBC.

“But he’s got a huge task as the past regime was so openly tribalistic in its appointments of people and people felt sidelined, especially from the central and northern regions,” he added.

There will be pressure to try and rebalance the past and people “will be keen to see if he can transcend that”.

The president’s supporters believe he can and he will offer a new kind of leadership inspired by God and driven by the needs of Malawians.

Inevitably, though, tough decisions will need to be made, not only in relation to the immediate challenge of coronavirus, but also how to tackle corruption and foster economic growth. These may begin to test his popularity.

One suspect shot, another arrested following robbery of Chinese shops