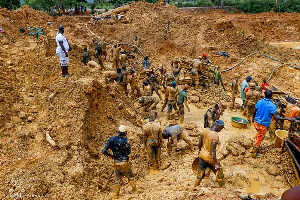 They were apprehended in an operation conducted by the Command upon a tip-off and complaint by the Constituency Chairman to protect the environment from being destroyed.

The suspects and their accomplices who managed to escape from arrest, started their operations somewhere in August 2019, at Anwia, Teleku-Bokazo and Nkroful, have polluted the River Subri, their main source of drinking water.

It would be recalled that the last three weeks the District Chief Executive (DCE) for the area led the District Police Command to seize seven Excavators from the areas.

But in an exclusive interview with GhanaWeb’s Western Regional Correspondent Daniel Kaku after the arrest at the Esisma Police Station, the NPP Constituency Chairman Samuel Akainyah disclosed why he led the police to arrest the suspected Galamseyers.

He said some residents in the area complained to him after the operation by the DCE and the police that some residents were using the seized excavators to destroy the land.

He added that after realizing that the fight against the galamsey could not be done by President Akufo-Addo alone, he quickly reported the case to the District Police Commander and according to him, the Commander instructed his men together with him to storm the galamsey sites.

The Chairman said he would not sit aloof and allow some selfish people to destroy the land.

He could not fathomed why the seized seven excavators could be used by the galamseyers for their illegalities.

The Chairman who suspected the DCE might have allowed the galamseyers to return to the sites, called on the three communities to rally behind the government in the fight against illegal mining.

He, therefore, took the opportunity to call on the three communities to support government to fight the menace.

“Fighting against galamsey is a shed responsibility and government alone can fight it so I will call on these three Communities to support the fight to protect the water”, he emphasized.

He added, “In fact I don’t understand why the Excavators which were seized by the DCE three weeks ago and we went to same areas and these Galamseyers were using it and Daniel Kaku I will urge you to demand answer from the DCE”.

He also used the opportunity to advise the youth involving in the galamsey activities to stop it.

On the way forward, the Chairman advised the youth to refrain from galamsey as government will soon roll out the Community Mining programme in the area.

When contacted the DCE Mr. Kwasi Bonzoh said he met owners of the seven excavators and asked them to reclaim the land.

Mr. Bonzoh explained that he could not remove the excavators from the site to a different location was that the galamseyers were able to remove the control boards from them.

He vehemently debunked rumours circulating on social media that he was involved in the galamsey activities.

He, therefore, challenged anybody with evidence that he DCE was neck deep in the galamsey operations.

He applauded the Chairman and other Constituency executives for their resolve to kick against the menace.

He, therefore, warned all chiefs and other residents to desist from doing galamsey in the district adding that, anybody found in the activities would not be spared.

On his part, the District Police Commander DSP Thomas Bayor explained why the galamseyers returned to the sites after their first operations.

He said his men were few and also they lack logistics to fight the galamseyers and therefore calling for assistance from the government to stop them for good.

The police has promised to investigate the three suspected galamseyers and act accordingly.

A visit by GhanaWeb’s Western Regional Correspondent Daniel Kaku to these galamsey sites, confirm that the ‘Subre’ river which is a source of drinking water to these three Communities (Anwia, Teleku-Bokazo and Nkroful), has been polluted beyond any measure.

The galamsey operations were also affecting residents and giving them sleepless nights as the galamsey sites were closer to their places of abode.

Some residents who spoke to Daniel Kaku were appealing to government to, as a matter of urgency, bring back Operation Vanguard to the sites to stop the Galamseyers and stop relying on the Ellembelle District Police Command alone.

Previous Coronavirus and chloroquine: Has its use been approved in US?
Next Court dismisses 3 applications brought before it by Hajia Fati