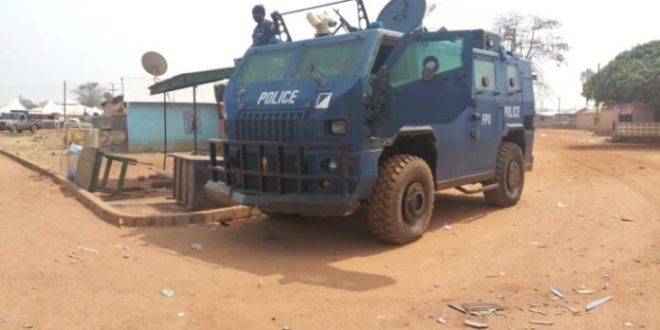 Angry youth of Akyem Kwabeng in the Atiwa West District of the Eastern region stormed Kwabeng Police station to demand the release of a suspected armed robber alleged to be part of a gang that killed a security man Saturday dawn.

The deceased security man, Tahiru Adamu, 43, was reportedly tied and lynched by the four-member robbery gang on Saturday, March 21, 2020, at about 2:00 am.

Starr News has gathered that the armed robbers stormed the Finest Fuel Filling station on Kwabeng to Anyinam road where the deceased was on duty, tied him in a room and lynched him.

The robbers attempted to break into the safe but could not. According to the manager of the Filling station, Felix Adika, there was no money in the safe.

Upon seeing the Kwabeng Night Patrol team, the robbers scaled over a wall and run away amidst gunshots by Police.

A resident – Nana Antwi Boasiako popularly known as Taamiawua told Starr News, the youth in the community quickly went on a manhunt for the suspects and managed to arrest one of the suspects, Emmanuel Darko, 23, with bloodstains in his dress.

He said timely intervention by the Kwabeng Police Patrol Team whisking away the suspect from the mob saved him from being lynched.

He said the youth not happy with the intervention by the Police, mobilized themselves with sticks, cutlass and other implements and stormed the Police station in an attempt to drag out the suspect for instant justice but some opinion leaders and traditional rulers in the community intervened.

The Akyem Kwabeng District Police Commander has asked the youth to remain calm as efforts are underway to arrest other accomplices. Meanwhile, Police have retrieved a big hammer from the room of the suspect during a search.

There have been pockets of robbery incidents in the Akyem Kwabeng area this year which have become a source of worry to residents and commuters on Anyinam to Kwabeng community.