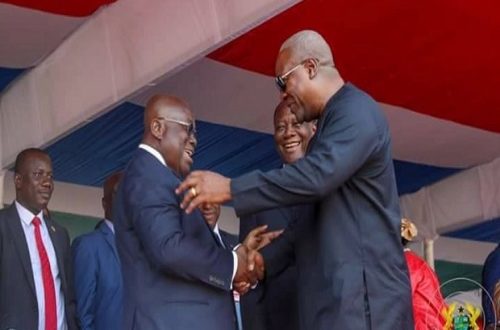 2020 Polls: It’s not going to be an easy win for NPP or NDC – Political Analyst

The December 7 polls is not going to walk over for the flagbearers of the two main political parties; the ruling New Patriotic Party’s (NPP’s) Nana Akufo-Addo and the opposition National Democratic Congress’ (NDC’s) John Dramani Mahama.

According Political analyst Michael Ebo Amoah, the dynamics in this year’s polls, are different from that of 2016, hence no political party especially the NDC and NPP should take the election for granted or be complacent.

“…Is a do or die affair because both the current president and former president have defeated each other before, he explained on Nyankonton Mu Nsem on Rainbow Radio 87.5Fm monitored by MyNewsGh.com

He was reacting to recent comments made by Sammi Awuku the National Organizer of the NPP who has admitted the 2020 polls and victory for the NPP will not come on a silver platter whereas the president and his vice have both stated the polls would be easy for the NPP considering their achievements.

Michael Ebo Amoah therefore says any individual who will think that the 2020 presidential and parliamentary elections would be an easy one is either a joker or not a serious politician.

He added that it is the reason why the President and his Vice are campaigning as if they are in opposition fighting for power.

He made this known when he was speaking at the official launch of the ‘Aspirants Unite for Victory’, a group made of parliamentary aspirants who lost in the parliamentary primaries of the NPP.The young politician said “for me, fighting for reelection is more difficult than fighting from the opposition and that is why we need everyone on the NPP ship to make sure that we cross the 2020 December 7.

“Victory will not come on a silver platter and that is why the President and Vice President are campaigning as if we are in opposition.”

To him, the party does not have to leave any stone unturned as it campaigns to retain power because every single vote counts if they will maintain power after the 2020 election.