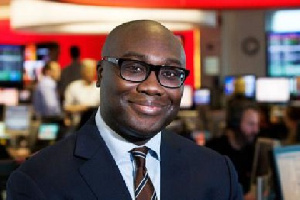 Iconic BBC Journalist, Komla Dumor would have been 47-years today

Ghana’s consummate journalist who worked for the British Broadcasting Corporation (BBC) Komla Dumor until his demise in January 2014 would have been 47 years today.

Born on 3rd October, 1972, Mr Dumor became a household name in Ghana and a global change-making journalist for his inspirational journalism.

Having excelled with Ghana’s Joy FM a subsidiary of the Multimedia Group Limited as the Super Morning show host, he went to the BBC and led a perception changing practice with the global media house.

A statement from the Komla Afeke Dumor Memorial Foundation and his father Professor Dumor celebrating him on this day reads;

Komla, you chose to walk in the footsteps of the emerging new African Renaissance and you made me accept that upon the ashes of our dead souls, we can rise to become higher beings.

The story is endless, the memories remain evergreen. And when it rains and I see the raindrops over you and your mother, Cecilia, I feel that God is giving all of us a new life. I miss you sorely. Rest in Peace.