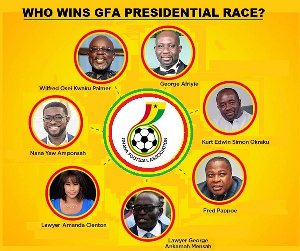 A leading candidate for the Ghana FA presidential elections is set to disqualified and thrown out of the race for ‘fraud and dishonesty’ after he was presented with a document showing he had forged the letterhead of the federation to carryout a fraudulent transaction, GHANAsoccernet.com can exclusively.

The candidate, who is said to be among the front-runners for the post, was confronted with the evidence of the forged letterhead when he appeared before the Vetting Committee.

The identity of the person is known to Ghana’as leading soccer news outfit Ghanasoccernet.com but has been withheld so not to gazump the work of the Vetting Committee.

The evidence was presented to the Vetting Committee by an anonymous petitioner who prayed the body mandated to clear out the weeds among the presidential aspirants to prevent individual from contesting for the post.

When the candidate appeared before the committee he was asked if the signature was his. He confirmed that it was his signature but was taken aback by the unexpected and strong nature of the petition.

The highly confident candidate was visibly shaken by the document and has now confided in campaign coordinators that he fears their ambitions would be scuttled by the petition.

The outcome of the vetting will be known by Thursday but the candidate looks to have thrown in the towel as it is not the only sticky situation he faced when he appeared before the committee.

Several key questions about his on issues that could disqualify him were raised as the committee sat between Friday and Saturday to vet the right candidates to face the electorate.

But all the leading candidates also had tricky situations with already anticipated questions that could affect their credibility but the deadliest was the questions over the forged letterhead of the GFA.

Several persons have written to the election body alleging criminality, fraud, lack of integrity and lack of credibility against the leading candidates in the presidential race.

There were no petitions against the only female candidate Amanda Clinton and George Ankamah, when they were grilled by the Vetting Committee.

Even though the petitions do not automatically mean that a candidate has been disqualified the sticky and concrete information on the forged letterhead has convinced insiders that the culprit will be thrown out of the race.

The election committee has already analysed the petitions as the seven aspirants appeared before them.

With an impeccable integrity required to steer the affairs of the football association, all the aspirants must go through a rigorous integrity test before the five-member panel.

Kurt Okraku was the first to face the five-man team and was followed by Amanda Clinton, George Ankamah Mensah, and Nana Yaw Amponsah.

The Vetting Committee is chaired by Frank Davies Esq. and the other members are Mrs Marian Barnor and lawyer Mr Emmanuel Darkwah.

Also on the committee are Reginald Laryea, a Marketing and Business Executive and Richard Akpokavie, a General Secretary of the Ghana Olympic Committee (GOC) and legal practitioner.