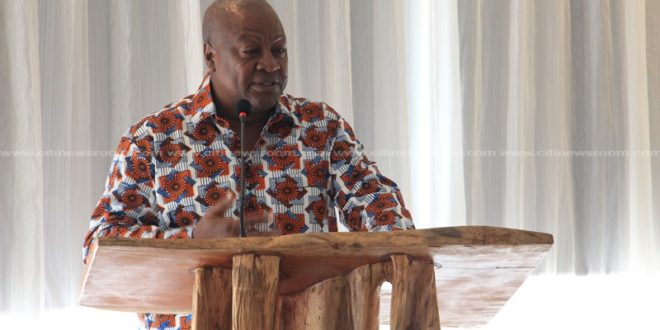 The flagbearer of the National Democratic Congress (NDC), John Mahama, has called for full disclosure on the government’s role in the controversial Aker Energy deal.

The former President asked the Conference and Ghanaians to query President Akufo-Addo, why the government would renegotiate a contract to the disadvantage of Ghanaians when there was low risk to the government.

“There was low risk in the Aker energy situation, so why would the government reduce its stake by about 48% to 18%?”

The former President, also observed that some of the key persons involved in the renegotiated Aker energy deal are linked to the Finance Minister, Ken Ofori Atta.

He was speaking at a meeting with the Catholic Bishops Conference in Accra.

The meeting is part of the broad consultations initiated by the NDC to interact with stakeholders and key organisations ahead of the 2020 general elections.

Some civil society organisations like a policy think tank, IMANI Africa, have already raised concerns with the deal.

IMANI Africa claimed that the country could be shortchanged by some 30 billion dollars if the contractual agreements are not reviewed; a claim that has been denied.

The Ghana National Petroleum Corporation (GNPC) and its CEO, Dr. Kofi K Sarpong, are currently at the centre of a lawsuit for handing over a 10percent stake the country had in the Deepwater Tano Cape Three Points (DWT/CTP) oil block to Aker Energy, a Norwegian Oil Company.

In 2015, Explorco Ghana Limited, a subsidiary company of GNPC, acquired 10percent interest in the DWC/CTP oil block at a time when HESS Corporation, the then operator of the DWT/CTP oil block, was offloading part of its stake in the block.

Parliament reportedly approved a budgetary allocation of $47 million for the acquisition.

The persons, who filed the suit contend that, before GNPC, could conclude the processes on the acquisition of the 10percent stake, there was a change in government and with it came a change in the board and management of GNPC.

They argued that, the new board and management of the GNPC, was expected to conclude the acquisition of the 10percent stake in the block “but failed to do so without any just reason.”

“The acquisition of the 10% stake would be beneficial to the country and sits well with principles of good public financial management and that the failure of GNPC to conclude this acquisition shall occasion financial loss to the State. It is the plaintiff’s case that when the new board and management of GNPC assumed office, Aker Energy who had acquired the majority state in the HESS operated block, requested to take over the 10% Explorco stake in the DWT/CTP block, which request was granted by GNPC acting through the GNPC MD.”

The plaintiffs insisted in their writ that the said move “sins against the Petroleum Act, 2016 (Act 919)” and asked the court to overturn such decision.

Aker Energy has a 50 percent stake for which it submitted an unsuccessful $4.4 billion plan for development to the government for approval.

In May this year, The Herald reported, how Energy Minister, might in the future have some questions to answer, as a result of the questionable manner he is handling the country’s petroleum fields.

John Peter Amewu, is busily re-negotiating petroleum deals brokered under the John Mahama regime and dashing away huge stakes to foreign and local partners whose identifies are shrouded in tight secrecy.

The Minority had opposed the government’s proposal to amend the original 2013 deal, insisting it will reduce Ghana’s holding in the block from 43 to 18 per cent and make the nation lose $10 billion.They also questioned the basis for which a company which was registered only last year, Quad Petroleum, was being given a five per cent stake as local partner.

The Herald had in the same month, written about the controversial AGM/Aker Petroleum Deals and revealed some interesting details about Quad Energy Limited, which took up a questionable stake in the oil-rich South Deepwater Tano oil bloc.

The paper’s publication dealt mainly individuals close to the Finance Minister, Ken Ofori-Atta, in important sectors of the Ghanaian economy.

Joseph Babatunde Ampah, a Vice President of Databank Financial Services Group owned by Ken Ofori-Atta, is a part owner of Quad Energy Limited, according to registration documents obtained from the Registrar General’s Department.

Earlier this year, the same Joseph Babatunde Ampah, was appointed the Director of the new Consolidated Bank Ghana (CBG) in charge of Beige Bank, which was among the collapsed banks, which were fused into a single state entity by the Bank of Ghana and the Finance Ministry.

On the Non-Bank Finance Industry, Daniel Ogbarmey Tetteh, a former Director of Databank, occupies a current position as the Director-General of the Securities and Exchange Commission (SEC). This appointment raised quite some contention.

However, the latest incursion into Ghana’s crude oil industry is the subject of contention as suspicions escalate about the role of Quad Energy in the explosive controversies surrounding the Akufo-Addo government’s renegotiation of a 2013 Petroleum Agreement that originally did not include Quad Energy.

The Akufo-Addo administration caused serious discontent by pushing Parliament to renegotiate a 2013 Petroleum agreement between Ghana and AGM Petroleum/Aker Energy Petroleum, under an emergency recall of the august House.The original plan would have seen Ghana’s stake drop from 43 per cent to 18 per cent of the oil-rich South Deepwater Tano (SDWT) bloc.

When Ghana’s stake drops, a significant part of it, will go to a questionable and a newly formed “Local Content partner” called Quad Energy, partly owned by Joseph Babatunde Ampah and David Adomako.

However, the latest information from the Ghanaian parliament indicates that the backlash had forced the government and Parliament to reduce the potential loss to Ghana in terms of stake-holding in the SDWT.

Details of the agreed renegotiated plans are still sketchy at the moment but available document show that Quad Energy, was registered on April 10, 2019, and immediately started working just when Energy Minister, Peter Amewu and the Finance Ministry, pushed the contentious agreement to Parliament for renegotiation.

The track-record of Quad Energy has also been proven questionable as the only Quad Energy operating minimally in the oil industry is based in Canada-called Quad Energy S.A.

Policy think-tank IMANI Africa, asked in a strongly worded letter dated May 3, 2019, to Energy Minister, Peter Amewu: “Who are the specific Ghanaian beneficial owners of this entity that makes it a “local content player?”

IMANI continued to elaborate: “The only Quad Energy active in risky exploration ventures and notable for that reason is Quad Energy S.A, a Canadian junior oil player and occasional Lukoil collaborator. Why is there no background information at all on this company in your memorandum?

It is believed that recoverable oil at the SDWT is worth more than all the oil at the Jubilee Field combined. This SDWT field, was part of the long-drawn litigation with Ivory Coast in which Ghana finally won.

In 2013, the agreement for extracting crude oil from the field, would have seen Ghana benefiting almost about 75percent stake, however, the government’s proposal to Parliament, dropped Ghana’s stake to less than 30percent and a potential loss of US$10 billion.

The bulk of the SDWT, would then go to AGM/AKER and Quad Energy.

According to IMANI, AGM Energy, is partly owned by Joseph Siaw Agyapong of Zoomlion, while Quad is a phoney cover for Aker Energy, because the other director of Quad Energy, David Adomako, is also a Board Director of Aker Energy.

Joseph Babatunde Ampah, is the son of Joseph Erskine Ampah, a powerful friend of the governing party, who is also said to be an acquaintance to the Finance Minister.

Joseph Erskine Ampah, died sometime in 2006 and was succeeded by his children and his half British, half Ghanaian Wife, Rosaline Ampah. The Widow, is also said to be a close friend of very important people in the current corridors of power.

Curiously, in 2018, AGM Energy, which was a partner to GNPC for the SDWT oilfield, had asked Boakye Agyarko, the then Energy Minister for a renegotiation of the deal, of which the Minister declined, saying renegotiation was impossible.

It is, therefore, inexplicable why the same government is pushing for a renegotiation that was rejected less than a year ago.

Other curious development in this deal, is the fact that Aker Energy, had operated in Ghana before.

According to Thompson Mensah of the pressure group, Alliance for Social Equity and Public Accountability (ASEPA), Aker Energy, previously operated as Aker S.A, but their contract with GNPC, was abrogated and they demanded compensation of US$ 30 million.

“But that $30million dollars was carried in a new Petroleum Agreement with AGM as 24percent for a subsidiary of GNPC called Explorco Today, this same Aker AS people who took our $30million dollars and left the Country are back under a new name Aker Energy and they want to take over the same interest of Explorco which they took $30million dollars for free of charge,” Mensah said in a statementby an online publication Whatsup News