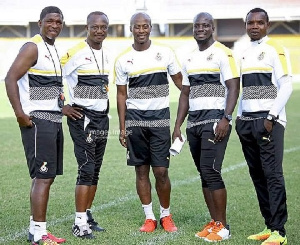 In a massive football earthquake, Ghana coach Kwesi Appiah has called for his highly-experienced assistant Tanko Ibrahim and legend Stephen Appiah to be sacked from their posts with the senior national team, Ghanasoccernet.com can exclusively reveal.

The Black Stars coach has written to the Ghana Football Association (GFA) in his post-Africa Cup of Nations tournament report saying he doesn’t want to work with the duo after the Black Stars’ disastrous showing at the tournament in Egypt in July.

The national team crashed out of the competition at the second round stage which was the country’s worst outing in 13 years which resulted in widespread calls for coach Appiah to be sacked because he is incompetent.

However, Appiah has turned the knife of his two popular assistants Tanko, who looks like the most experienced among the technical staff having coached in the Bundesliga and the Japanese top-flight as well as being the assistant coach of the Cameroon national team.

With the Africa Cup of Nations qualifiers looming in November, Appiah has called for massive changes to his backroom staff before the qualifiers start saying the decision will help the Black Stars qualify.

Previous Corruption is a problem in Ghana – Austrialian High Commissioner
Next Alleged Coup Plot: ‘Days Of Coups Are Over’ — Buhari