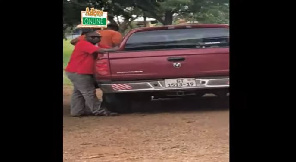 Former president of the now-defunct Ghana Football Association, Kwesi Nyantakyi, has popped up in a video that has gone viral on the internet.

While the details of the video are still sketchy, sources within the football fraternity say they are videos of the former president and some of his associates on a campaign tour to canvass for votes for one of the seven candidates contesting for the GFA presidency.

Reliable information available to adomonline.com suggests the former president and his allies, key among them being Kofi Manu, also known as Blue Blue, were at the palace of Dormaahene, Osiadieyor Agyemang Badu to solicit for votes.

The video has maverick Kofi Manu engaged in an altercation with some folks whose faces did not show in the footage but who were heard taunting Blue Blue with Anas’ investigative expose with a passive Mr Nyantakyi leaning against a pickup vehicle a few metres away from the altercation.

Even though the young men in the video accused Mr Nyantakyi and his friends of attempting to campaign for a candidate believed to be Winfred Osei Palmer, Mr Manu denied the allegations in the footage, asking, “Who told you were are here to campaign”.

Mr Manu also told one of the young men that he was not the only person who could lay claim to the palace of Dormaahene.

Watch the featured video below for more:

Readers would recall that Mr Nyantakyi was handed a life ban from all football-related activities by FIFA in October 2018 following various violations of the governing body’s ethics code, including bribery and corruption.

Nyantakyi, a former member of FIFA’s General Council, was found guilty after being filmed by an investigative journalist in a hotel room appearing to take a $65,000 bribe from a supposed businessman seeking to sponsor the Ghanaian football league.

The adjudicatory chamber found Mr Nyantakyi guilty of having violated art. 19 (Conflicts of interest), art. 21 (Bribery and corruption) and art. 22 (Commission) of the FIFA Code of Ethics,” FIFA said in a statement.

As a consequence, Mr Nyantakyi was banned for life from all football-related activities (administrative, sports or any other) at both national and international level.

Nyantakyi, who was also a former vice-president of the Confederation of African Football, resigned in June after a recording by undercover journalist Anas Aremeyaw Anas appeared to show him demanding kickbacks to pass on to top government officials, including the presidency.

Nyantakyi later apologized to Ghana president Nana Akufo-Addo and the government for what he called his “indiscretion”.

He denied any wrongdoing regarding match-fixing.

The scandal, along with undercover footage that showed numerous match officials receiving bribes, forced the suspension of the Ghana Premier League in June, which has still not resumed.

Former Ghana Football Association (GFA) board member Kofi Amoah was placed in charge of a four-member normalization committee in September that was tasked with steering the affairs of football in the country for the next six months.