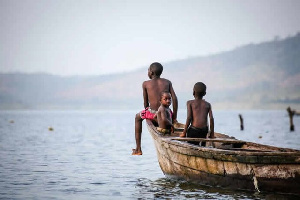 The bodies of four children have been recovered from a watercourse in a flood-prone area at Bremang UGC in the Suame Municipality in the Ashanti Region on Saturday evening.

The minors drowned when they went to the area to swim.

Residents in the area made a distress call to the police and officials from the National Disaster Management Organisation who conveyed the to the hospital.

They were confirmed dead after they were sent to the Tafo Government Hospital.

According to NADMO officials, the fourth deceased person is yet to be identified because his relatives came for his body from the scene.

“At about 5 pm, I was called and informed that some children had drowned at Bremang UGC in the Suame Municipality. When I rushed there it was true, but the bodies were recovered already. I even met one Sergeant Appiah, a police officer. So we put the bodies in my vehicle and together with the police officer we took the three bodies to the Tafo Government Hospital where the Doctor pronounced them dead,” he said.