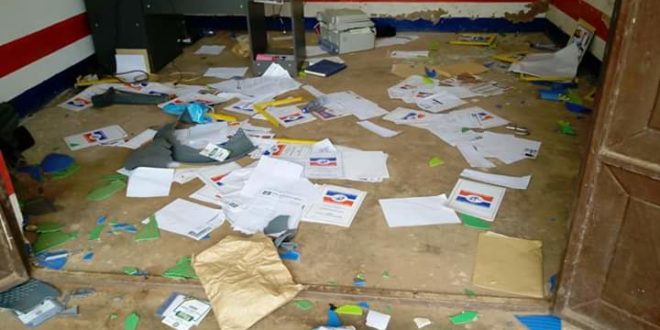 Some angry NPP youth group who identify themselves as Eagle Eye Youth of the Sagnarigu constituency have vandalised the NPP office in the constituency over the lack of jobs.

According to them, they’ve been neglected by their leaders for far too long and their action is to send a signal to party leaders in the constituency and the region at large.

They accused the Northern Regional Chairman Mohammed Bantima Adam Samba popularly known as ‘Chairman do all’ and the Regional Organizer Alhaji Rashid COP for neglecting them whenever there are job opportunities and other benefits for the party such as tickets to Hajj.

According to Abubakari Thahiru Saalana, who spoke to Starr News on behalf of the group, they can no longer tolerate the discrimination by the party against them.

He said “when they gave a chance for police recruitment we were ignored, then they brought fire service recruitment opportunities and we were neglected as well”.

According to Saalana, they confronted the Northern regional chairman of the party, Mr. Samba but he denied any knowledge of such opportunities.

They have therefore vowed not to allow the recruitment process of the National identification card to take place in the sagnarigu constituency.

The group said “Whoever try us will face our wrath. We are not afraid of anybody and we are not going to stop. Even Monday we will come back here, the recruitment will not take place”.

Previous Okyenhene angry with NDC over insults
Next Photos of Junior Manuel Agogo’s funeral out!