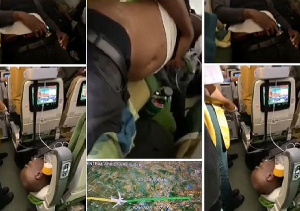 The hopes of two Nigerian men to successfully smuggle hard drugs hidden in their stomachs ended tragically as they lost their lives while aboard an Ethiopian Airline flight from Brazil to Ethiopia.

The two men, Chigozie Pascal Aniagbado and Chijioke Chidioka Ogbuefi, are believed to have swallowed the drugs at the airport in an attempt to avoid being caught, but sadly ended up dead after the substance burst inside of them while on the flight, reports said.

Other reports said that the men had been placed on oxygen during the 12-hour flight but lost the battle, even as the pilots attempted an unsuccessful emergency landing.

According to an eyewitness who posted his accounts online, the emergency landing was unsuccessful because the nearest country at the time was an Ebola-stricken one.

According to the eyewitness, he was sitting in a middle seat with one of the men on his right side; a “black skin” man just like him.

He continued that along the journey, this man asked him to check on the map and let him know how far in the journey they had gone. He responded that they had gone halfway thus far.

The eyewitness added that this man had by then started acting very strangely, complaining of uneasiness and sickness. He then asked for water, food and even drank olive oil, but none of those helped him.

“Then he said to me “do you speak Igbo,” I said “yes.” He said he doesn’t know if he would make this journey that it seems the drugs he swallowed must have exceeded its stay in his system.”

The unidentified eyewitness then added that at this point, his mind sank and he began to shiver but the man told him not to be scared because the substance wasn’t in his bag, but instead in his body.

It was at that point that the man pleaded with him to get up and get him water but he said he refused to, fearing that the man could have easily hidden something in his bag.

He then flagged down a hostess who came to attend to him.

“She came and served him water. He demanded for food, he was given. He became calm. Few minutes later, he brought an olive oil from his bag and drank.”

Just around this same time, this eyewitness said he noticed that another passenger was also exhibiting the same symptoms as the man to his right.

Eventually, some medical doctors on the plane came to his aid, questioning him while treating him. The two men were then put under oxygen to aid in their breathing but as the eyewitness narrated, just about the time he was done typing his account of events, he got the news that the men did not make it.

Nothing further has been heard in relation to this incident yet.