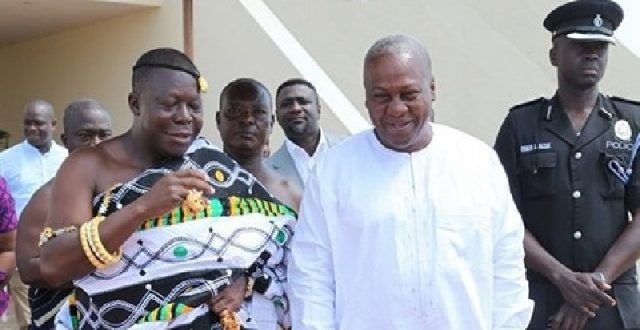 Asantehene Otumfuo Osei Tutu II has revealed that his palace played a pivotal role in persuading former President John Mahama to concede after he lost the 2016 presidential poll as an incumbent to the then-flag bearer of the New Patriotic Party (NPP), Nana Akufo-Addo.

“At the conclusion of the last presidential and parliamentary elections, the country [Ghana] stood on the edge of disaster”, the revered Asante monarch told the UN General Assembly recently about the important role traditional leaders play in the political and democratic dispensation.

“The UN representatives and the diplomatic community were aghast, alarmed that Ghana was going to slip down the slope of electoral violence.

“Fortunately, the moral authority of the palace was at hand. We were able to intervene to persuade the losing candidate to accept his fate and fly both candidates for a quiet encounter to pave the way for a handover,” recounted Otumfu Osei Tutu II.

Mr Akufo-Addo polled 53.9% of the votes cast in that election while Mr Mahama polled 44.4%.

The former president is seeking a comeback in the 2020 presidential poll.