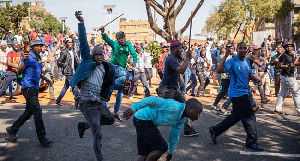 Five Ghanaian nationals who were arrested during the xenophobic attacks in Pretoria and the Central Business District of South Africa, Johannesburg will appear in court on Monday, 9th September 2019.

The High Commissioner of Ghana to South Africa, His Excellency George Ayisi-Boateng disclosed this in an interview with Kwaku Anane Junior, The host of “Ghana Te Sen” show on South Africa – based Press Radio on Saturday, 7th September 2019.

He said one (1) female and four (4) males were arrested at the Sunnyside.

“Five Ghanaian nationals are behind bars at the Sunnyside Police Station following a swoop by the police to check on permits of foreigners, I have visited the Police Station and hired Lawyer for the detained Ghanaians so am optimistic they would be granted bail on Monday” Ayisi Boateng stated.

The High Commissioner debunked report that three Ghanaians have sustained injuries in the ongoing xenophobic unrest in South Africa.

According to him, one person sustained injury and assured that he is receiving the necessary medical attention.

“I am urging the good people of this country to remain calm as we seek the interest of our nationals who are caught up in this situation and an end to the unrest.”  He added.

Black natives in South Africa have for the past week taken to looting and burning of shops owned by other nationals in Pretoria and Johannesburg.

South African police have arrested dozens of the protestors who claim immigrants; especially Nigerians are taking over their jobs and selling illicit drugs.

Listen To The Audio Below: