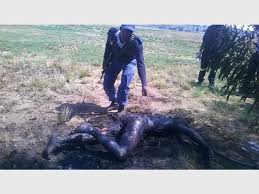 The Delta State Police Command says it has arrested a woman for allegedly setting a young man ablaze over a N200 debt.

Another female accomplice allegedly involved in the crime is on the run, Delta Police Commissioner, Adeyinka Adeleke has said.

A source said the victim owed the woman who doused him with fuel N200, but it is unclear what dealings the victim had with the other woman who lit the matches that consumed the debtor.

It was learnt that trouble started when the duo accosted the victim demanding for N200 owed one of the women, a black market dealer of petroleum products.

It was gathered that after the victim was drenched with fuel, the other woman threw a match in the direction of the deceased.

The victim died before medical assistance could reach him.

Adeleke said the suspect would be charged to court after investigation.