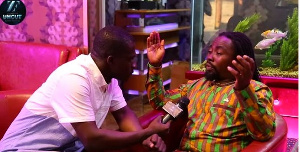 Ghana’s rap legend, Michael Elliot Kwabena Okyere Darko widely known as Obrafour has revealed that he cannot pinpoint what exactly prevented his “Godson”; Sarkodie from declining his invitation to feature in his documentary.

An obviously dissatisfied Obrafour who disclosed this to ZionFelix on ‘Uncut’ said, till date, Sarkodie has not showed up to tell him something but he presumes (Sarkodie) didn’t make time to feature.

According to him everything in life happens for a reason. He said “Me and Sark you know I have said time and again that at any given period when it comes to him, so as to why, how, it will be difficult to say anything concrete, it is what it is. Up till date he has not showed up, he had assured that he would be there but he has not been able to come through as his work load is too much”.

“I am not offended by his disappointment that is why even I would want to say probably there something hindering him that I may not know. The truth I am not this big because of human beings even if God blessed me through humans, God has a reason for doing that, so whatever happens I know it is for a reason. It may be for the good, it is only God who can tell if his feature will be good omen or bad”.

Obrafour, who will be celebrating two decades of being in the music industry with a mega concert at the Accra International Conference Centre in November this year says he cannot confirm if Sarkodie will perform at the concert but once he graced the launch, people will expect him to present because he is not writing anybody off.
“From day one, he was at the launch so definitely you will expect him to be at the concert, I am not writing anybody off at the moment but I’m praying that probably whatever it is that is hindering him God will take it away and he will be able to come through, he added.

Considering the history between Obrafour and Sarkodie, it has come as a shock to some people, who have had the privilege of watching the documentary, that the latter is not featured in it.

The “Do You” hitmaker has on several occasions declared that Obrafour is a major influence when it comes to his music and in fact, he has even touted that the ‘Yaanom’ hit rapper is his inspiration.

And after years of featuring the rap legend on some of his well-known tracks -including ‘Saa Okodie No’- some industry persons, who have watched a documentary on the Obrafour’s 20th anniversary in the Ghanaian music space, have started asking questions.

The documentary highlights some of the significant happenings since Obrafour started his rap career and also features key industry persons who played roles in the rapper’s career.

But Sarkodie’s manager, Angel explained that there were definitely arrangement issues because “Sarkodie” was over willing” to feature in the documentary and was booked to shoot at 2 pm on an agreed date but unfortunately, the rapper was still at Pastor Brian Amoateng’s IYES Conference at the National Theatre as at that time.