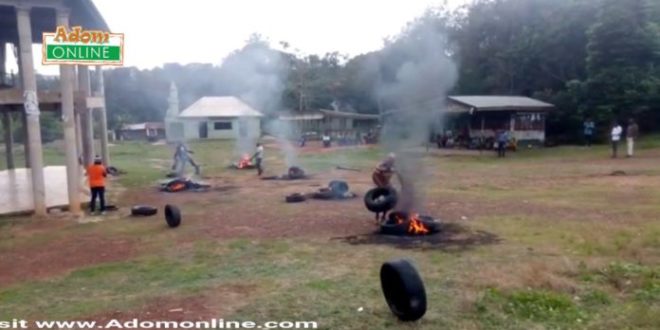 Some aggrieved supporters on Thursday, September 5, 2019 burnt car tyres near the party’s office in protest against the disqualification of Massawudu Mubarick, their candidate for the party’s upcoming primary in the constituency.

This was a reaction to a statement issued by the Functional Executive Committee disqualifying Mr Mubarick, and clearing the path for incumbent Asawase Member of Parliament, Muntaka Mohammed Mubarak ahead of election 2020.

They have locked the party office and threatened to lynch any executive who dares open the office.

As an immediate measure, the party has reported the matter to the Ashanti Regional Police Command for protection.

Rather, he proposed they petition the party about their grievances and it would be addressed accordingly.

“NDC is a lawful party so I will urge the supporters to use lawful means to have their issues addressed,” the NDC Secretary said.

This notwithstanding, Mr Zu said the decision by the Functional Executive Committee still stands until the party decides otherwise.

Previous 2020: Haruna Iddrisu drops hint of Mahama’s running mate
Next Good news for Menzgold clients as NAM1 reveals when monies would be paid