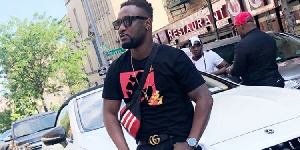 Archipelago threatens to beat up Criss Waddle for mocking him

He said this in response to Criss Waddle’s post that mocked people’s reaction to Archipelago’s song on YouTube.

Archipelago is taking heat from all angles ever since he released ‘Megye’ 3 days ago.

Some said music is not his calling while some think Patapaa is a better artiste as compared to him.

Archipalago who is known for vlogging has jabbed some artistes in the past for ‘stealing’ his term to make hit songs.

“Kwaku u change your diapers finish??? Wo maame tw3m… this is a just curtain-raiser wait for the main event plus music no be comedy but u stole my infamous term #BieGya for biggest hit since you started music and I no collect u nothing aight everywhere I go see you u go smell some motherfuckin pepper either u pay me or i beat your motherfuckin ass!!! #FaNe10”