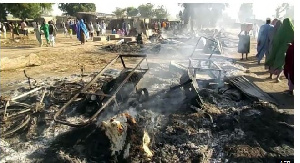 At least 101 houses and shops were razed following a raid by terror group Boko Haram in Nigeria’s northeastern state of Borno, an official has said.

The Boko Haram militants, who rode on bicycles to the affected villages, were said to have immediately torched houses, mostly having thatched roofs and walls.

Kolo said residents of the three communities were displaced following the raid. Babagana Zulum, the governor of Borno, also told Xinhua that a security arrangement has been put in place to secure the displaced victims.

Zulum said new houses would also be constructed to assist those affected by the attack.

Currently, there is no official confirmation of casualties.

The northeast region has been destabilized for over a decade by Boko Haram, which most notoriously kidnapped hundreds of schoolgirls in 2014.

Boko Haram is known for its agenda to maintain a virtual caliphate in the most populous African country.