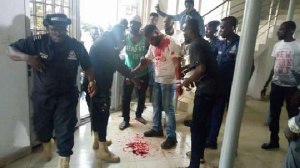 One person sustained injuries on Saturday during the parliamentary primaries of the National Democratic Congress (NDC) in Tema East after a scuffle erupted during the counting of ballots.

Mr Edga Adjetey Badu, Tema Community One, Site 19 branch Chairman, NDC, sustained injuries on his face and chest as his oozing blood soaked his white shirt and collected on the floor as a result.

Mr Badu, who was also the polling agent for Nii Tetteh Kraku Bediako, the contender to Mr Isaac Ashai Odamtten, immediate past Tema Metropolitan Chief Executive, allegedly created confusion at the National Fisheries Association of Ghana (NAFAG) hall where the election was held.

He received severe beatings from some delegates after he was apprehended by the police for tearing up some of the ballot papers during counting after he realized that his candidate was losing.

The election which hitherto was peaceful saw delegates from Community One and Tema Newtown casting into different ballot boxes.

Community One was deemed as a stronghold of Mr Bediako and Newtown, his waterloo.

Therefore when it became obvious that his contender Mr Odamtten had made a headstart in Community One during counting, Mr Badu allegedly quickly grabbed the sorted ballot papers of Tema Newton and started tearing them up.

He was subsequently arrested and counting continued after which Mr Odamtten was declared the NDC parliamentary candidate elect for Tema East after polling 891 out of the 1,161 votes cast while Mr Bediako had 266 votes.

Meanwhile, Mr Bediako who was not a delegate earlier on went to the centre to vote but was not allowed as his name was not in the register.

Mr Odamtten in a victory message, commended the police for ensuring peace and order at the centre.

He thanked executives and the delegates for the confidence reposed in him and promised not to disappoint them.

He said the party was on a mission to serve the people of Tema adding that he would start his work by empowering the branches and wards of the party in the constituency. 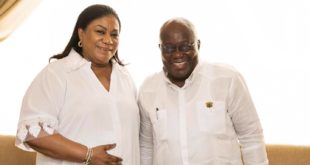