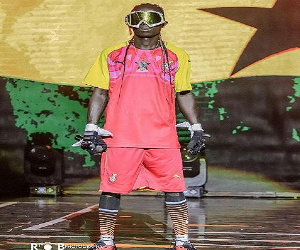 Justice Amoah, popularly known in the music circles as “Patapaa” is making significant strides across worldwide music landscape with his debut album.

With over 10,000 streams on Boomplay in just a week, the “Pa2pa Scopatumanaa” album demonstrates the uniqueness of one of Ghana’s sensational music artistes.

When sitting back and listening to the album consisting 16 tracks, there are so many things that come in mind especially with the versatility of Patapaa having featured different kind of artistes.

The “Sweet Honey” track which features Stonebwoy shows how Pataapa appreciates the Highlife rhythm, something which he says inspires his genre of music.

”My songs are inspired by Highlife songs and I feel we need to sell the Highlife genre more to the outside world,” he told Ghana News Agency. The ‘Chensee’ track featuring Ada would certainly get your legs wobbling coupled with the trademark dancing antics something synonymous with Patapaa’s style of music.

When asked what inspires some terms in terms in some of the songs, Patapaa mentioned that the terms in his songs are not meaningless as had been perceived.

”That’s my God giving talent, bringing out terms to excite people and to distinguish me from other artistes something which would be difficult to emulate by others,” he said.

Songs including ‘Kumchacha’, ‘Enemies’, ‘Chaskelen’, ‘Aye Goal’, ‘There Is Nothing’ are songs you can’t pass by on the album and gaining massive play in the country.

Previous Abeiku Santana is a thief; I’ll beat him up – Lucky Mensah
Next Over 200,000 people given Merck Ebola Vaccine in Congo – Government