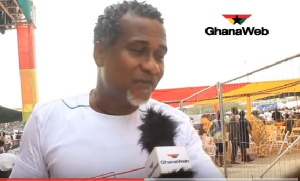 Abeiku Santana is a thief; I’ll beat him up – Lucky Mensah

I a video he shared on social media the ‘Come Back’ singer said Abeiku has lied on the radio that he marketed his song for him in the U.S.

“If you dare me, I won’t take you to any diviner. I will beat you up anywhere I meet you,” he added.

Explaining the matter on Kingdom FM’s ‘Entertainment Arena’, he told Londona that the Okay FM presenter had always ridiculed him while playing his songs on the radio.

“I don’t like his character. He is greedy. He always wants one to feel inferior. Every station he goes he tries to snitch on other presenters,” he said.

According to Lucky Mensah, Abeiku insulted him on the radio in 2011 but he did not respond to him.

He has challenged Santana to come to make an account to him if he really meant what he said about selling his records abroad.

“He should come and account for the songs he claims he sold, to me and my producer,” he said.

Lucky Mensah is known for songs like Lucky Mensah ‘I Miss You,’ ‘Aduu Sumo Akwadu,’ ‘Old School,’ among others.

Tags Abeiku Santana is a thief