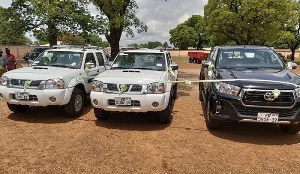 Another pick-up vehicle has snatched in Rambo style within the Tamale Metropolis bringing the number of missing vehicles in similar fashion to three.

Sources reveal to MyNewsGh.com that the latest vehicle belonged to the Northern Regional Director of the Nation Builders Corps (NaBCo), Abdul Hakeem Yahaya which taken away from him at Kanvili on Thursday night.

Narrating what happened on Accra-based Citi Fm, he said “I had a phone call from one of our guys that the regional coordinator called him and said armed robbers had attacked his private residence. They attacked him, three of them, two with AK-47 and one with a cutlass. They searched the whole house looking for money because they were asking him to give them money. After he said he didn’t have money with him, they searched the whole house and took the car keys. They gathered all of them in one house and locked them and made away with the car.”

Prior to Thursday’s incident, a Toyota Hilux pick-up vehicle belonging to a Pharmacist in Tamale was also snatched at gunpoint by unknown persons.

That occurred barely a month after the same model of vehicle with registration ER 3516-19 belonging to the Savannah Regional Coordinating Council was allegedly snatched by armed men in the same town.

In the case of that vehicle with registration number GE 1566-17, it was snatched by the armed men at the gate of the victim’s home at Foe, a suburb of the Tamale Metropolis at about 10pm according to the police.

While waiting for the main entrance of his gate to be open, the bandits numbering about three signaled him to roll down his side glasses but when he was resistant they pointed guns at him, took the vehicle, bundled and blindfolded him into it.

He was then taken to a village called Taha and left in the care of two others who were waiting on a motorbike after which the vehicle and the other occupants sped off.

Previous Journalist arrested over ‘fake news’
Next Aspirants promising heaven on earth is “easiest”; “let’s be guided by our past and appreciate our hopeful present”- Pastor cautions Ejisu; commends Owusu Aduomi