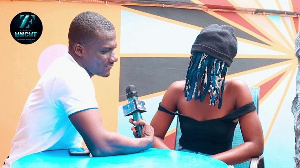 A young 22 year old girl who claims to be bisexual has revealed that despite Ghana’s objection to same sex relationships, some married Kumawood actresses are actually lesbians.

The girl whose name is Adwoa in a conversation with Zionfelix explained she declined when someone offered to connect her to one of these actresses.

According to her, she got to know these actresses through her lesbian partner who age has been with for a while.

Adwoa was introduced to lesbianism seven years ago and she has since paired it with prostitution in order to make a living for herself and her family.

Adwoa hopes to give up the habit and she is in need of a stable source of income before quitting.