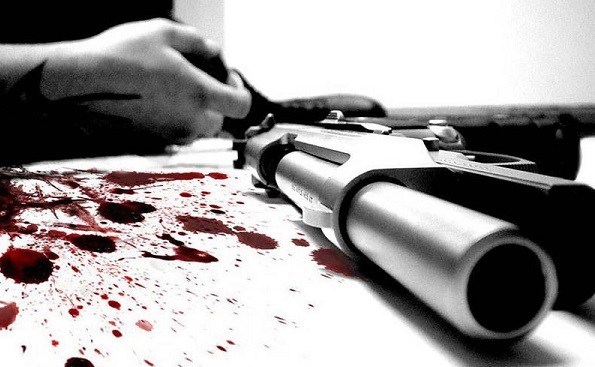 A disagreement between two goldsmiths turned bloody when one shot the other at Ashanti New Town K.O., a suburb of Kumasi on Wednesday.

The victim, Kofi Brentuo is said to be in critical condition after one Nana Asamoah reportedly fired at him three times at close range.

He was rushed to nearby Manhyia Hospital but was referred to Komfo Anokye Teaching Hospital.

It is unclear what the con triggered the confrontation but eye-witnesses suspect it is work-related as Nana Asamoah pulled a gun in Brentuo’s shop.

Personnel from Manhyia Police Divisional Command were called immediately to restore order as some supporters of Brentuo attempted a reprisal attack.

An eye- witness and resident of  K.O, Nana Kwabena Ntansuo who helped sent the victim first to the Manhyia Hospital says he was awakened by the sound of three gunshots.

“I was awoken from sleep by sounds of three gunshots. I followed up and saw the man who had been shot almost on the ground so I advised he be sent to hospital immediately. We quickly rushed him there in a taxi,” he narrated in Twi.

According to him, the two goldsmiths whose shops are not far from each other, have disagreements over a gold deal.

“I heard they had disagreement over gold. He was falling over when I got to the scene. Police personnel have been looking for traces of blood but there is none here,” he said.

Police are yet to arrest the suspect.

The incident comes just hours after police declared a spiritualist wanted over the death of Otumfuo’s Asamponhene, Nana Kwadwo Afoduo.
Source: Ghana I Nhyira FM
Related Topics:Goldsmith
Up Next