Home / Ghana’s economy expands by 24.6%; now worth GHC256bn after rebasing

Ghana’s economy expands by 24.6%; now worth GHC256bn after rebasing

Ghana’s economy has expanded by 24.6 per cent for last year, according to rebasing figures by the Ghana Statistics Service (GSS).

This was after the GSS reviewed the based year from 2006 to 2013 and the way of calculating economic growth for the country.

The revision should mean that the new growth rate for 2017 stands at 8.1 per cent compared to an old rate of 8.5 per cent.

However, the GSS says this does not mean that growth has declined because the base of the economy has expanded.

The value of the economy and per capita

The economy is now worth GHC256 billion as a result of the rebasing. If this is shared among a population size of 28.96 million, then everyone could get GHC8, 863.

Rebasing of national accounts series means that they are replacing the old base year used for compiling the constant price estimates to a new and more recent base year.

According to the Ghana Statistical Service, there are three main reasons for the change in the rebased GDP coverage. This includes Methodology, Structural and Coverage.

The change in the base year has also been influenced by a change in the structure of the economy since 2006. Some activities which had little economic importance in 2006 have gained prominence now and may contribute more to the economy than before. 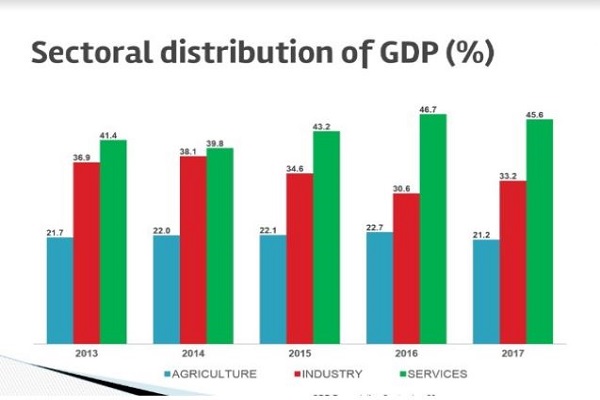 Based on the rebased GDP, the Services sector grew by 3.3 per cent in last year, industry by 15.7 per cent and Agric by 6.1 per cent. This means that industry recorded the highest growth in the economy in 2017. 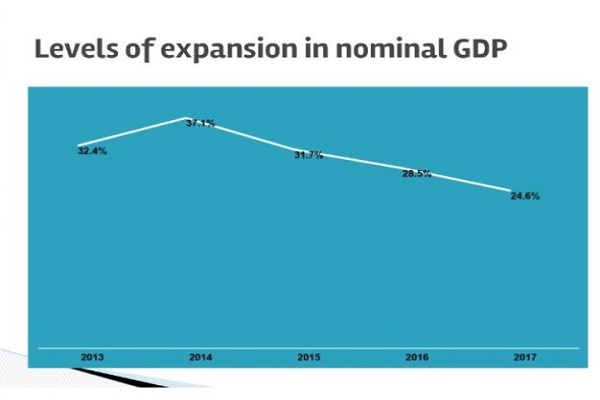 Which sector has the largest share of the economy?

Base on the rebasing, activities in the Agric sector now accounts for 27 per cent of the economy, Industry 36 per cent, while services still led the pack with 41 per cent.

The development would affect Ghana’s debt to GDP ratio, meaning that government may have to increase tax collections to make for the expected shortfall.

According to think tank, Center for Economic studies;
– Short-term revenue performance measures by the government could mean upward review of taxes in the 2019 budget.

– Grants in aid of vulnerable sectors of the economy could dip further as has been the case post middle income status, coupled with exit signals from the donor community premised on government’s undocumented policy of “Ghana Beyond Aid”.

– The tendency to interpret higher per capita income as a true reflection of improved livelihoods could provoke public anger.

The Centre for Socioeconomic Studies (CSS), guided by these facts, believes that the post-rebasing focus of government should be on fiscal prudence through improved tax and non-tax revenue performance to spur productive expansion of the Ghanaian economy and accommodate the high expenditures building from numerous manifesto promises.