Confusion has erupted at the Effiduase Senior High School (Effisco) as a final year student has been allegedly stabbed to death at Effiduase in the Sekyere East District of the Ashanti Region.

The deceased, identified as 18-year-old Derrick Adjei Emmanuel, also known as Tiger, who was a business student in form “3B” was stabbed in the neck by an unknown assailants on Wednesday, September 26, 2018 in the evening around 7. 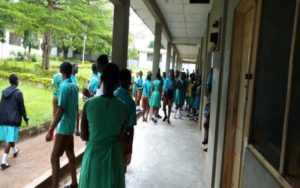 Confirming the incident to Otec News, Francis Appiah, the Effiduase District Police Commander, Superintendent Asare Bediako, said they had a distress call from the housemaster of the school that a student had been found dead on the school compound and had been rushed to the hospital.

“According to our investigation, on Wednesday, September 26, 2108, at 7 pm, the two students jumped over the school walls to watch football match and on their way, they were attacked by two people who demanded for money and mobile phone. Douglas Obeng gave out his GHC2 but Tiger was reluctant and struggled with them, and in the process one of the assailants pulled a sharp pointed objected and stabbed him on the neck,” he narrated.

“After the incident, Obeng went to town without informing the authorities, the stabbed student managed to get back to campus by jumping over the school walls and lay at the back of a dormitory. A student raised an alarm when he saw him in a pool of blood, he was rushed to the hospital where he was pronounced dead,” he added.

ACP Bediako said no arrest has been made so far and while investigation is underway and assured that the culprits will be arrested.

Effects to the reach the schools authorities and students for their side of the story has proved futile as they are tight lipped.

The body has been deposited at the Effiduase Government Hospital for autopsy.