A swarm of bees flew into the engine of a Mango Airlines plane, forcing a delay in flights at the main airport in South Africa’s coastal city of Durban.

Bee experts were called in and they safely removed the estimated 20,000 bees from the engine, the low-budget airline said.

The incident was extremely unusual, and the bees were probably resting before planning to fly on, one expert said.

It was unlikely they intended to make a “smelly” engine their home, he added.

“I have certainly never seen anything like this in my eight years in the aviation industry”, he told South Africa’s News24 website.

The airline has tweeted a photo about the incident: 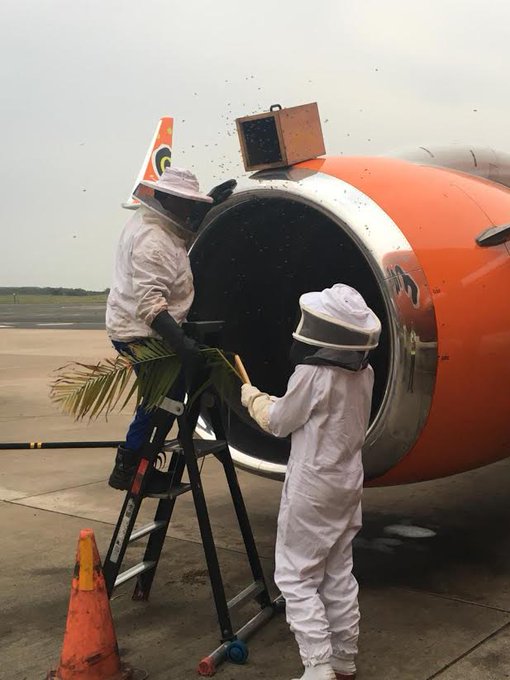 Two beekeepers were called into remove a swarm of bees that had started building a nest in the engine of one of our aircrafts in Durban on Sunday. This unfortunately meant delays on three of our scheduled flights. The bees were safely removed.#flymango

It took a while for the removal team, from the privately owned A Bee C company, to get approval from the airport authorities to get on to the runaway.

It was a “quick job” to remove the swarm once permission was granted, A Bee C’s Melvyn Dawson said.

“We have encountered some unusual bee removals, but this was a first for me,” he told News24.

The bees were now at the home of his brother, a beekeeper, and would be taken to farms, Mr Dawson said.

Mike Miles, the chairman of the South African Bee Industry Association, said the bees were probably taking a break in the engine.

“Normally those places are greasy, smelly and hot and not at all ideal as a permanent home for bees. Bees prefer secluded wood cavities. This is very unusual,” he was quoted as saying.