Jemima Oburonyi Sam was a pre-teenager during the centenary celebration of the establishment of the Methodist faith in the Gold Coast, now Ghana.

The 11-year-old girl was growing up in Cape Coast, the capital of the Gold Coast, when the first ‘Singing Band’ T-shirt was made in the year 1935.

According to historical accounts, John Wesley, his brother Charles Wesley, and George Whitefield, are credited for establishing the Methodist faith which also gave birth to many missionaries who spread throughout the world.

The Gold Coast had its share of the spread of missionaries and saw the arrival of Rev Joseph Dunwell in the year 1835 with aim to spread the Methodist faith.

Because of his energetic response to things, he focused on the missionary labour to his best abilities, however, he was short lived, supposedly after suffering malaria, a disease that cut the lives short of most missionaries who came to Africa.

Despite this heavy blow, Thomas Birch Freeman, a notable missionary succeeded Rev Dunwell and helped established the foundations of the Methodist faith.

In 1935, he helped organised the first ever rally held by the Cape Coast Diocese of the church, as part of activities to mark 100 years when Rev Dunwell introduced the faith in the Gold Coast from 1835 to 1935.

It was during this celebration that the first T-shirt was produced and distributed among believers of the faith, and after 83 years, Jemima, born in 1924, has kept hers intact. 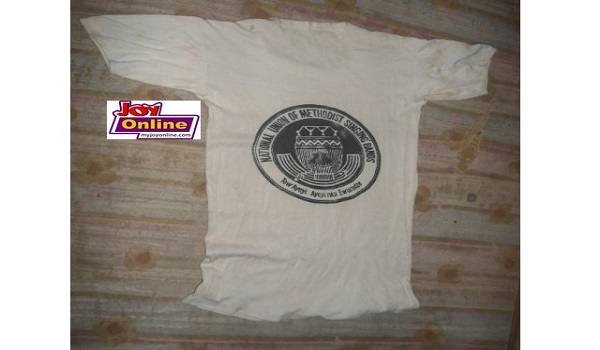 John Wesley Akonu, a leader and a Circuit President of the Singing Band of the Methodist Church, confirmed the documentation of the first Methodist Singing Band Shirt made in Ghana in 1935.

Very Reverend Charles Awortwe-Pratt was the Diocesan Chairman of Cape Coast at the time.

Granny Jemima Oburony Sam always admires the Shirt, and said it is historic because of the year it was made.

She revealed how her mother introduced her to the Singing Band group. They sat on cloths laid on the floor because they were kids and participated in the rehearsals.

She was honoured to be part of the first badge who received the first T-shirt made, her mother was not privileged to own one.

She has kept the shirt in her box of clothes until recently when she uncovered the history to her grandchildren.

“That shirt is valuable to me and I like to talk about it a lot”, she told them.

Previous Cedi down just 7%; we’re better managers than NDC – Bawumia
Next Stop throwing dust into our eyes – Jinapor to NPP on cedi fall