Fire has gutted a four bedroom apartment close to Bohye FM, a local Radio Station at Patasi in the Kwadaso Municipality. 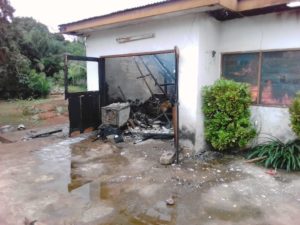 The apartment was empty at the time of the fire. The cause of the fire is as yet unknown.

The fire, which started in one of the rooms which houses an elderly woman at about 12noon on Wednesday, destroyed properties running into hundreds of Ghana Cedis.

The fire service rushed to the scene after a report was made to them. 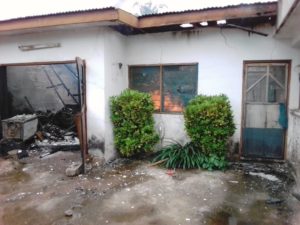 Speaking to Newsmen, a daughter of the owner of the apartment, Yaa Gladys said, the fire started from the old woman’s room which later spread to other rooms in the house.

She described the blaze as “very severe”.

Gladys also said it took over an hour for the fire service to arrive.

During that time, “everything in the house was destroyed. All my documents including my passports got burnt. Not even a single pin [survived],” she told Newsmen.

Personnel from the Ghana National Fire Service in the Ashanti Region have since commenced investigations into the incident.