A businesswoman who has undergone a lot of trauma is currently serving a two-year term at the Nsawam Female Prison after being accused of theft.

Esther Oppong in her mid-30s was drugged and raped by her employer who turned round to accuse her of theft leading to her incarceration according to Ibrahim Oppong Kwarteng who runs the Crime Check TV Gh.

The host of the show who is soliciting public support to get the jailed woman freed through an appeal to her sentence which occurred a fortnight ago has promised a showdown for the supposed ‘rapist’.

He shared on his Facebook page the story which reads “Esther claims her male employer (name withheld) drugged her and raped her when he invited her to render accounts of the business he had entrusted in her care.

A weeping Esther threatened to report the incident to her family but her employer begged her to rescind her decision. He raped her another time.

This time, she claims he tied a cloth to her mouth. Esther reported the incident to her father, but the ‘rapist’ came begging with the explanation that her integrity and social standing will suffer if she reports him to the police. Esther had meanwhile contracted severe gonorrhea after the act. Sensing danger, the man promised to foot her medical bills. (He never did).

Upon her refusal, he reports illiterate Esther to the police with the charge of stealing. According to Esther, her plea to the court to play the recorded tape was not accepted after the judge had earlier agreed for it to be tendered in.

She was jailed three weeks ago for TWO years at the Nsawam Female Prison. When the poor has no voice, Prison is the only home! Join us to appeal Esther’s sentence. To the alleged ‘rapist’ who thinks he can always bulldoze his way through, the way of reckoning is near” 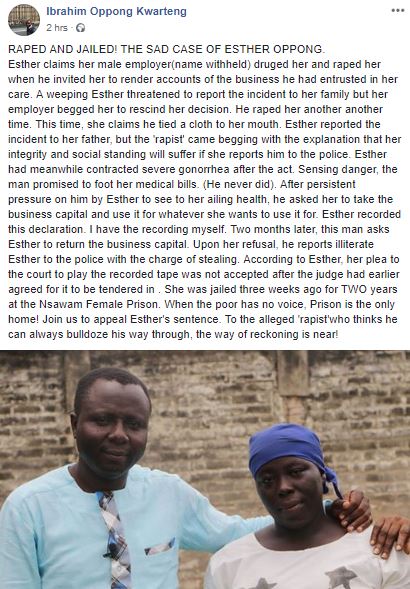