Drivers of Ghanaian Members of Parliament are demanding an increase in their salaries.

The drivers say most of them are paid a monthly salary of GHc400 without social security.

A copy of petition to the Leadership of Parliament intercepted by otecfmghana.com revealed that, they have been compelled to make the issue public because their salaries have not seen any improvement for almost six years even though MPs have had several salary adjustments within the period.

“In this day Ghana, collecting a salary of GHS300, GHS400. and GHS500 a month is very bad. What are we going to do with that [money]? That is what we are saying. We are not fighting with them. We are begging them that they should increase the salaries for us,” one driver  pleaded.

Otec news source indicates that these drivers receive their monthly salaries on while SSNIT contributions are not paid to secure their future aside from the risk involved.

Most of them are not happy with the condition in which they find themselves but because there’s no job they’ve decided to manage it while looking for another with a good salary to cater for their families.

The most annoying part is that the MP’s and their lavish V8 cars have been insured comprehensively while their drivers are left to their fate when the unfortunate incident happens meanwhile our Members of Parliament know better, but nothing is done about it despite several complaints at personal levels with their bosses.

They are also demanding allowances on Public Holidays, Collective Bargaining Agreement, Exposure to imminent Risk and Hazards among other things.

Read the petition Below 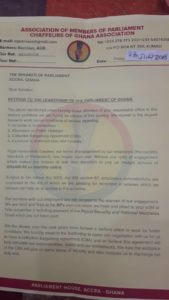 VIDEO: Many Injured As Cargo Truck Collides With A Sprinter On The Sakumono Beach Road