President Nana Addo Dankwa Akufo-Addo has described as a “fruitless” venture, the sending of pastors and chiefs to Special Prosecutor Martin Amidu with the aim to influencing him to drop cases against them that are being investigated by his office.Mr Amidu disclosed in a statement on Tuesday that the Member of Parliament for Bawku Central, Mahama Ayariga, had made attempts to stop an investigation into an alleged corruption-related offence.Mr Amidu accused Mr Ayariga of sending some personal friends, former colleagues, chiefs and pastors to beg him to stop the investigations against him [Ayariga].The Special Prosecutor also stated that he has reported the lawmaker to the Economic and Organised Crime Office (EOCO) for attempting to block a probe into the acquisition of three used white Toyota Land Cruiser V8 vehicles after refusing to honour an invitation by EOCO over the matter.Reacting to this development, Nana Akufo-Addo, in a tweet on Thursday, 9 August 2018, said: “And to those who are sending chiefs and men of God to the Special Prosecutor to intervene on their behalf, to try to dissuade Mr. Martin Amidu from conducting his investigations, from the little I know of the man, they are engaged in fruitless venture”. 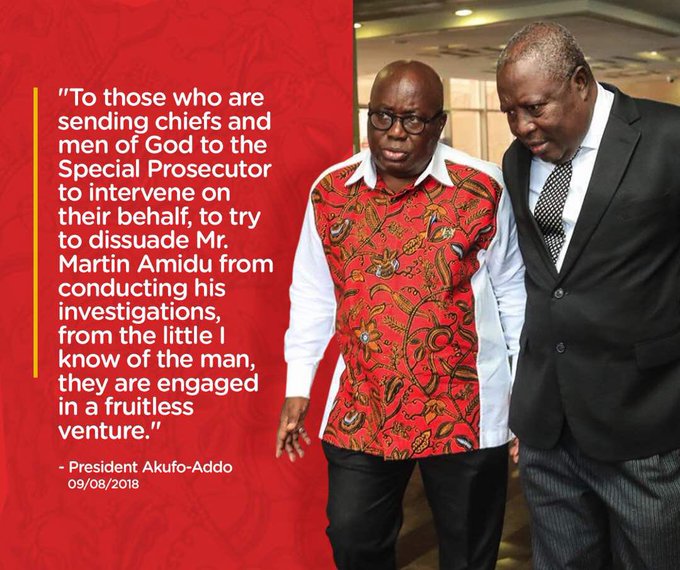