PHOTOS: Joy as Omieri, the giant snake returns to Nyanza

Share
Thirty one years after its death made Newspaper headlines, the legendary python nicknamed Omieri, is back in the limelight, amid excitement at his former home in Kisumu County.
Just as it did when it died from injuries inflicted by wild fires in the hills of Nyakach, Omieri is once again the subject of discussion as the government plans to return its remains to Kisumu. Omieri – the biggest snakes ever seen in Nyanza was ‘worshipped’ by traditionalists who believed it had mysterious powers especially on the wellbeing of the Luo Community. They believed it was the goddess of rain, bumper harvests and wellbeing of the people of Nyakach, which explains the grief that greeted its demise one sunny afternoon in 1987 after a fierce fire burnt it. And for more than two decades, the Luo community has been waiting eagerly for the return of the snake that is deeply rooted in the region’s cultural history. 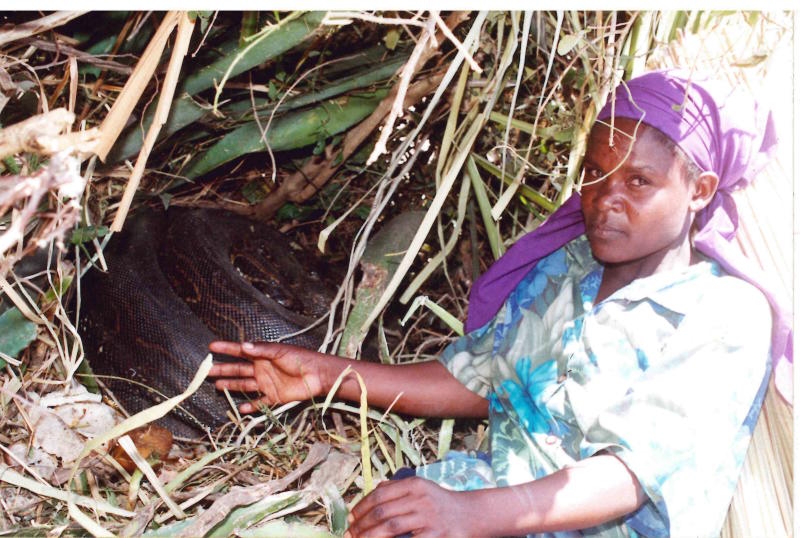 It once made a former MP for Nyakach, Ojwang’ Kombudo lose his tempter in Parliament as he demanded to know the whereabouts of its body that had been flown to Nairobi for preservation. Next month, however, residents will have a chance to view the remains of the giant snake which is set to make a return to the region when The National Museums of Kenya (NMK) transports it to Kisumu for a five-day cultural event. NMK will ferry the snake to Kisumu in a fragile operation since the snake’s body has been preserved for long and is delicate.
Omieri Snake caretaker Benta Atieno. The National Museums of Kenya will ferry the snake to Kisumu. [File, Standard] On Thursday, elders, activists and locals expressed joy over the plans to bring the snake to Kisumu and have vowed to organize a special traditional ceremony for the snake which has become a national artefact. Nyandiko Ongadi, one of the elders of the Luo Council of Elders described Omieri as an elder which took care of the people and ensured that they had enough food to keep them going.
Ongadi who recounted how elders would offer sacrifices to the snake said that a lot has changed since the snake was taken away from the region and taken to Nairobi. “A lot of miracles used to happen whenever Omieri appeared and our people never went hungry whenever it appeared,” said Ongadi.
The elder noted that they would visit the tiny village of Wasare in Nyakach to see the snake which became an international sensation and would shower it with gifts and watch it as it fed. “Since Omieri died, we have never seen such a miracle, its return is a blessing even though it is dead,” said Ongadi. The elder, however, said the remains of the snake should be preserved in Kisumu to help restore the strong cultural beliefs tied to it.
According to the Director General of NMK, the snake will be brought to Kisumu for viewing during a cultural festival organized by the United Nations Educational, Scientific and Cultural Organization (UNESCO) bringing together 47 counties. Currently, the remains of the legendary snake are kept in a cubic glass tank filled with industrial methylated alcohol at the National Museum in Nairobi.
2018-08-02
admin
Share