A devastating head-on collision between a ‘trotro’ and a 4×4 vehicle at the Ebony junction close to Dzorwulu has resulted in the death of the bus conductor (mate), with the bus driver critically injured.

According to an eyewitness, the incident happened early Friday morning when the trotro driver, driving from the 37 Military hospital road, lost control of his vehicle after an overtaking went wrong, and veered into the opposite lane, colliding with the 4×4 vehicle.

The bus conductor died on the spot while the driver suffered serious limb injuries, leaving him in a critical condition. The occupants of the 4×4 also sustained minor injuries.

“Around 6:20 am, I was inside when I heard a car crash. When I came out, I saw the bus cross from the other lane to this lane. There was a 4×4 vehicle parked at where it was headed, resulting in a collision. Two people were in both cars,” he recounted.

Another eyewitness claimed that the ‘trotro’ driver was trying to overtake a colleague bus driver in order to get passengers onboard his bus when he lost control of the bus and sped into the 4×4 vehicle.

He also alleged that the 4×4 vehicle which was towed away minutes after the accident had a government registration license plate. 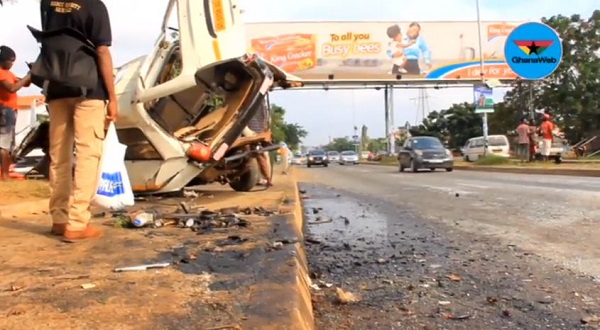