President Akufo-Addo has assured that government will aggressively implement recommendations by the yet-to-be constituted committee to investigate circumstances that led to the killing of seven youth of the Zongo community by police in the Ashanti Region.

He said government will enforce to the recommendations to forestall future occurrences.

“The other day too, a tragedy occurred at Asawase. We are establishing a committee of enquiry to look into those events and make recommendations as to the way forward. I want to assure the country that the recommendations that will come from the committee will be one that will be scrupulously implemented and enforced by the government to make sure that incidents like that never happen again,” he said during his tour of the Northern Region.

There’s been tension in the area in the last few days following the killing of seven residents the police claimed were armed robbers.

The seven were believed to be part of eight suspected robbers whose attack led to the death of a Police Officer with the SWAT Unit of the Ashanti Regional Police Command at Ayirebikrom near Manso Nkwanta.

Residents of the area who say the seven were not armed robbers burnt car tyres and protested massively to protest the killings.

They also blocked all roads leading to the Kumasi Central mosque during one of their protests.

Relatives of the seven men say the Kumasi police framed the deceased persons by planting weapons on them after killing them.

They insist the seven men were not robbers, and were also not armed.

Gov’t to set up committee to investigate

The Ministry of Information, announced this week that government is in the process of setting up a committee to investigate the issue.

The Information Ministry explained that the government took the decision as a result of the conflicting accounts it has received on the issue. 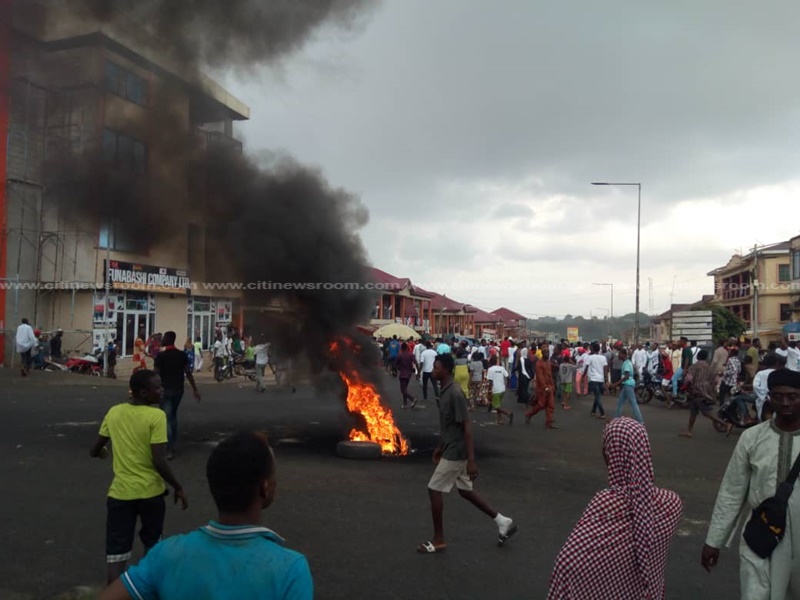 “Since the police and the families of the seven young men have different versions of the occurrence, the government has decided to set up an independent committee to investigate the matter,” a statement signed by Deputy Information Minister, Curtis Perry Kwabla Okudzeto added.

The Inspector General of Police and his entourage were chased away by some of the angry youth of the area last week.

The youth defied the Police’s riot control measures and pelted them with stones and other projectiles as they lined up to attend a meeting with the leaders of the Zongo community.

The actions of the youth prevented the Minister of Information and the Zongo and Inner Cities Development Minister who were leading a government delegation from attending the meeting.

VIDEO: I’m not the cause of her death – Musician who offered Ama Broni $100 to twerk naked speaks

The Overlord of the Ashanti Kingdom, Otumfuo Osei Tutu II, has expressed worry over the snail …