The Ghana Bar Association (GBA) has condemned a police assault on a woman carrying a baby at the Shaishie branch of Midland Savings and Loans in Accra.

The victim, Patience Safo was ruthlessly assaulted by a police officer who has been identified as Frederick Amanor Skalla while holding a baby.

She had insisted on withdrawing a sum of GHS270 from the facility as her previous attempts to withdraw the money days back had failed due to a network challenge.

The officer who was servicing as a security at the financial institution was called to escort her out but ended up beating her in the process.

Management of Midland Savings and Loans in a statement has rendered an apology to the customer. The police officer in question has also been arrested.

The GBA in a statement described the conduct of the police officer as “appalling, despicable and disgraceful”.

The Association is calling for appropriate sanctions to be meted out to the culprit.

The Ghana Bar Association (GBA) has viewed with horror and revulsion a video circulating on social media in respect of an incident which allegedly occurred at a financial institution in Accra. The GBA is appalled that a police officer, whose primary duties include ensuring the safety of persons, should brutalise the very persons he is duty-bound to protect, with such impunity. The Bar condemns in no uncertain terms the reprehensible and cruel conduct of the police officer.

The GBA would wish to empathise with the victim of the assault for the traumatic experience she underwent, and to stress that under no circumstance should any citizen or resident of Ghana be subjected to such cruelty.

The conduct of the police officer is appalling, despicable and disgraceful, and we hereby wish to reiterate the Bar’s condemnation, made on 30th June 2018, of persons who attack citizens or persons no matter the cause. We also wish to reiterate that the security of all citizens is not only a fundamental human right but it is also integral to ensuring the rule of law. Insecurity is a threat to the rule of law and undermines our democracy; hence it should have no place in our democratic dispensation.

Security officers who under the guise of maintaining peace and order attack, abuse and dehumanise citizens must not escape the arm of the law and victims of such brutalities must receive justice.

Previous BREAKING NEWS: Apremdo chief destooled for ‘pursuing selfish agenda’
Next Too much expected from students over a short period – Former GES boss 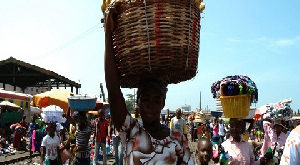 A 12-year-old head Potter, Ms Sumaiya Ibrahim, has appealed to individuals and organisations for assistance …