The management of the Bulk Oil Storage and Transportation Company Limited (BOST) has assured that making the organization more transparent and accountable is a priority.

The company in a statement said it was not taking the concerns over alleged malfeasance at the company lightly.

This is after pressure group, Occupy Ghana wrote to the Chief of Staff, Akosua Frema Osei-Opare, asking for investigations into allegations of smuggling and illegal dealings at BOST.

An industry report released by the Ghana Chamber of Oil Distributors (CBOD) revealed that Ghana lost about GHC 1.4 billion in taxes and regulatory margins from smuggling and export dumping of petroleum products in 2017.

BOST has said it is “currently in the process of implementing more effective corporate governance measures aimed at ensuring that management is better placed to deal with the current challenges that the industry is bedeviled with.”

“We wish to emphasize that management is committed to ensuring that investigations and audit relating to alleged irregularities will be conducted in the most open and transparent manner,” the statement said.

CBOD in its report blamed the losses on increased smuggling activities along the country’s coasts.

The report also accused officials at the Presidency, National Security and the Ghana Revenue Authority of being complicit.

According to the report, the government has, over the years, also failed to sanction persons involved in the diversion of premix fuel, among other things.

Since the report was released, the Managing Director of the BOST, Alfred Obeng Boateng, was sacked in June 2018 by President Nana Akufo-Addo.

No reason was given for his sacking.

Find below the full statement 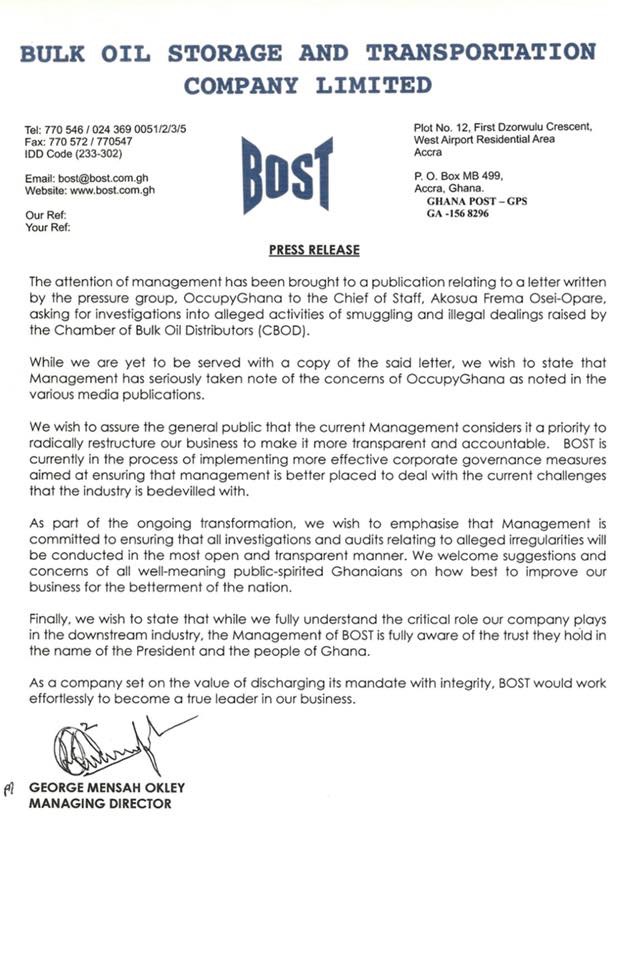