Co-operative Cocoa Farmers  are gearing up to petition President Akuffo Addo through the ministry of Food and Agriculture to ban what they described as illegal cutting down of cocoa trees for the cultivation of rubber in cocoa communities in the Eastern, Western and Brong Ahafo Regions. 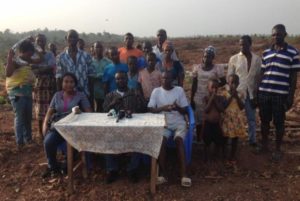 According to the president of West Akyem Co-operative Cocoa Farmers and Marketing Union, Mr. Ohene Boafo, some cocoa farmers have either been lured or compelled by some Traditional Rulers to clear their cocoa plantations for the cultivation of rubber plant. A situation, he said was worrying and needed the intervention of the government. 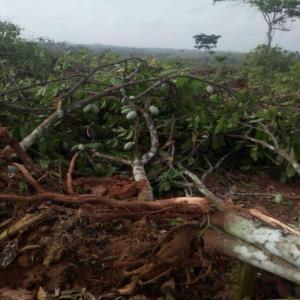 Speaking on Otec FM’s morning show (Nyansapo), Mr. Boafo said the importance of the ccoa sector to the development of the country cannot be compared to the rubber.

“The cocoa sector has being the backbone of the development of the nation since our forefathers and it would remains the backbone of the country which could not be over emphasized, so if we lose our cocoa there will be no life for the upcoming generation and our mother Ghana” he stressed.

Mr. Boafo further stated that aside cocoa being a valuable export commodity, it also provides food and jobs for Ghanaian people but rubber cannot provide these benefits. He consequently called for laws that will regulate or punish those who destroy cocoa farms for rubber.

“Cocoa is an important commodity but there is no law govering the cutting down of cocoa trees illegal, previously illegal chain saw operators destroyed the cocoa farms and recently illegal mining popuary known as galamsey destroyed more acres of our cocoa farms but nothing has been done to that effect so are we sitting down unconcerned for people to clear the cocoa tress for the cultivation of rubber? Nevertheless, as cocoa farmers we won’t sit down for this to happen so we are to petition the president to come out with regulations that would protect the cocoa trees from such attacks,” he stated.

Mr. Ohene Boafo therefore advised cocoa farmers not to allow anybody to deceive them to cut down their cocoa tress for rubber since the importance of cocoa cannot be compared to rubber.