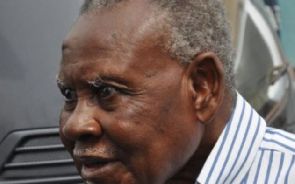 J.H Mensah, a Gold Coaster born in October 1928 is a founding member of the governing New Patriotic Party and served in three different ministerial positions under the John Agyekum Kufuor administration.

Mensah began working as an assistant inspector of taxes in 1953 while the Gold Coast was still under colonial rule. In 1958, Mensah joined the United Nations Secretariat at the Centre for Development Planning,

In 1969, he was elected to parliament and became the Finance minister until 1972, when he was replaced by future head of state Ignatius Kutu Acheampong after the military coup.

Beginning in 1974, Mensah worked in the private sector both in Ghana and abroad. He was imprisoned by the National Redemption Council from 1975 to 1978. Although banned from political activity in 1979, he was active for the Popular Front Party in the 1979 elections.

He also served as Chairman of the Sunyani District Council in Brong-Ahafo Region (1979–1981), and proprietor of Banka Farms. Exiled in England, in 1983 he headed a group opposing the PNDC.

He also served on the African Advisory Council of the African Development Bank from 1993 to 1997. In December 1996, Mensah contested a parliamentary seat in Sunyani East District as a member of the New Patriotic Party, which he won. He was re-elected in 2000. Prior to John Kufuor’s election in 2001, Mensah was the minority leader in Parliament.

Merchants to demand IDs for MTN MoMo transactions from February 1