Home / My suicide threat was a stunt – Former AIDS ambassador

My suicide threat was a stunt – Former AIDS ambassador

Troubled former AIDS ambassador for the Ghana AIDS Commission, Joyce Dzidzor Mensah who issued what was considered a suicide note on Saturday, now says she faked it to protect her children in school.

Dzidzor had bid a final ‘farewell’ to this world of troubles ahead of what she said was going to be her final interview on earth at 3FM, from where she was to proceed to the village where her children are, kill them and kill herself.

Joyce Dzidzor had concluded thus: “May our souls rest in peace.”

Graphic Online duly alerted the police, which quickly deployed to salvage the situation if she indeed intended to carry through the threat.

Happily, the controversial actress and singer tells friends it was only a stunt to better the peace of her children. 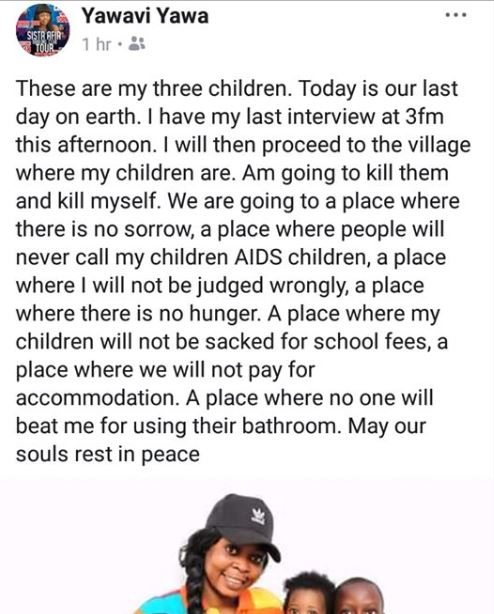 Previous VIDEO: Amissah-Arthur was killed by a generational curse – Eagle Prophet
Next PIAC to engage Special Prosecutor over expenditure of oil money

Government will on Tuesday, September 22, 2020 begin a weekly Nation Building Updates designed to …

15 cows were on Saturday evening, struck to death by lightning at Ikogosi in Ekiti …