Ahead of Saturday’s conduct of elections at the New Patriotic Party’s (NPP) National Delegates’ Conference, President Nana Addo Dankwa Akufo-Addo has advised delegates of the party to maintain and safeguard the gains chalked up by the party in the 2016 election.

In his message to delegates of the party through the Daily Graphic, the President noted that it had been an arduous journey for the party since 2008, but working together, shoulder to shoulder as fellow patriots and nationalists for democracy in Ghana, the party was able to overcome the difficulties of opposition and won a famous, historic victory that had brought the party back into office.

The Daily Graphic had elicited a message from the President, through the Communications Directorate of the Presidency, to the 6000 or so delegates attending the 26th annual delegates conference of the party in Koforidua, the capital of the Eastern Region, from today (Friday)  to Sunday.

Battle is the Lord’s

“Our stamina was tested, but we kept going in the full belief that the battle was the Lord’s,” the President stated.

In consonance with the theme of the conference, which is: “Building a Stronger Party, Delivering Prosperity to Ghanaians”, President Akufo-Addo urged delegates to be mindful that the election of national officers was of great importance.

“We must elect officers whose principal goals will be to unify the party, strengthen its base and machinery, work hand in hand with the government and ensure that we give this country good governance to bring progress and prosperity to all our people,” he advised.

The President said the unfortunate events that characterised the aftermath of the previous national delegates conference in April 2014 held in Tamale, which led to the suspension from office of three senior elected officials and a handful of other officers for undermining the cohesion of the party, must never occur again.

To that end, President Akufo-Addo stressed the need for the delegates to maintain and safeguard the gains of 2016 by electing the right persons.

The party’s delegates who would be gathering in Koforidua today, the President said, held the key to the future of the NPP and Ghana.

“We have the programme and the personnel that can lead Ghana to its destiny of progress and prosperity. When we bring prosperity to Ghana, we bring prosperity to ourselves. We must, accordingly, conduct ourselves in a manner that will deepen the confidence the Ghanaian people have reposed in us. The decisions we take here at this conference should enhance the prospects of our collective future,” he added.

The President was confident that “the NPP delegate will make the right decision and help build a stronger party which will help deliver prosperity to the people of Ghana.” 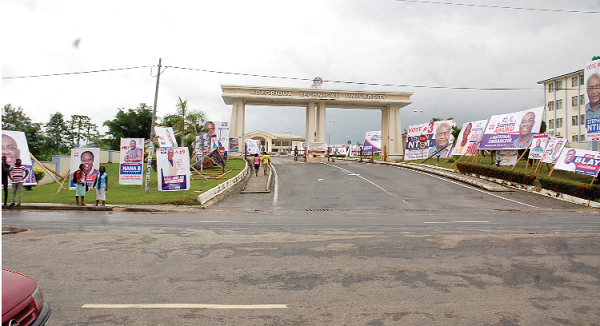 Meanwhile, the race to the New Patriotic Party (NPP) headquarters has become keener as the days draw closer and that explains the current atmosphere in Koforidua, which is hosting the party’s annual national delegates conference.

The Koforidua municipality and adjourning communities are awash with posters,  banners and other forms of advertisement on the aspirants.

Some of the candidates had earlier posted their posters on fences,  electric polls,  public and private properties.

With just a day to the election, the entire municipality is flooded with posters,  bill boards and banners of the aspirants.

Reports also indicated that most hotels and guest houses in Koforidua and its environs, specifically in Suhum, Nsawam Aburi, Adukrom, Somanya and Tafo, had all been booked.

Aspirants, delegates and supporters of the party who will be attending the party’s conference, but have not already booked their hotels, may want to consider securing for themselves accommodation very faraway from Koforidua or spend the nights in their vehicles.

The Eastern Regional First Vice Chairman of the party, Alhaji Bodinga, who is a member of the Local Organising Committee (LOC) put it aptly “Eastern Region blinks and Koforidua shines with the colours of the NPP”.

He was speaking to the Daily Graphic in an interview.

The venue for the conference, the Koforidua Technical University (KTU), is inundated with the branding materials of the aspirants.

Some aids to the aspirants were busy posting last minute posters on the fences at the entrance to the KTU when the Daily Graphic visited the venue on Tuesday.

According to Alhaji Bodinga,  all arrangements for the event, including securing accommodation for the 41 aspirants and security had been finalised.

“Security arrangement is intact.  About 1,500 security personnel made up of the police,  military and the party’s own security will be at the venue to ensure maximum protection for all”.

Alhaji Bodinga said the programme was scheduled to begin on Friday during which the Vice President, Alhaji Mahmoud Bawumia, would lead the party to the Koforidua Central Mosque for prayers.

Both aspirants and delegates, according to Alhaji Bodinga, were expected in Koforidua on Friday.

“Currently, the LOC established by the party’s National Elections Committee has concluded all arrangements for us to hold a successful conference.  What we are praying for is a good weather”, he added.

According to Alhaji Bodinga, there would be a total of 634 delegates from the Eastern Region alone.

The region has 33 constituencies, with 17 delegates from each constituency, making a total of 561.

“All these people are expected to cast their vote”, Alhaji Bodinga said.

Initially, the National Elections Committee (NEC) of the party vetted 43 candidates but two of them who were vying for the Chairmanship and General Secretary positions opted out.

When the delegates gather on Saturday,  they will be making a choice between  three National Chairman aspirants made up of Mr Freddie Worsemawu Blay,  Dr Richard Amoako Baah and Mr Stephen Ayensu Ntim as they appear on the ballot.

The delegates will also be required to pick one out of the seven vying for the Vice Chair position.  They are Mr F F Antoh, Ken-Wuud Nuworsu E,  Agnes A. Chigabatia, George Isaac Amoo, Vida Agyekum Acheampong, Michael Omari Wadie, and Rita Talata Asobayire.

Undoubtedly,  the delegates will hold the key to who the next National Organiser will be and is being contested by Sulemana A. Sadik Nabicheinga, Emmanuel Tweneboah Kodua and  Sammy Awuku.

Madam Joyce Konokie Zimpare and Kate Gyamfua, who are vying for National Women’s Organiser position, will also know their fate at the end of the conference.

Mr John Boadu, who is the current acting General Secretary of the party, will face-off with his main contender, Mr Richard Ahiagbah.

Who controls the purse is a critical decision and the delegates will have the option of choosing between six National Treasurer aspirants made up of Mr Kwabena Abankwah-Yeboah, Abraham Obeng Amoakohene, Nuhu Bayorbo Mahama, Mary Posch-Oduro, Hajia Ruka Ahmeed, and Kwabena Oppong Frimpong.

In all, over 6,000 people made up of aspirants and delegates will be in Koforidua for the three-day event.

Van Vicker, an award-winning Ghanaian actor and entrepreneur, has revealed that, in all the female …