Home / Ghana Is Not A Failed State – Duncan

Ghana Is Not A Failed State – Duncan

The Central regional Minister Kwamena Duncan has called on Ghanaians to be proud of the country’s Republican status as it is indeed worth celebrating.

He explained that the country is not a failed state despite its slow pace of development.

He added that even though the country has not gotten to its preferred destination, there is enough to show that the country’s situation is not beyond redemption.

Ghana he said has been able to erect the right structures which could serve as a catalyst for its take off if the right policies are implemented.

Mr Duncan stressed that Ghana’s peaceful environment and stable democratic tenets are at least evidence that she has not fared badly at all as some countries cannot even boast about such basics as electioneering violence, civil wars and poverty have made life unbearable for such countries.

Speaking at a banquet for senior citizens in Cape Coast, the regional minister indicated that President Akufo-Addo is committed to addressing the challenges facing Ghana’s development and by so doing repositioning her for strong economic transformation.

“Even though as a country we have to be rubbing shoulders with the Asian Tigers we haven’t gotten there yet. Some of them even came down here to learn certain fundamentals from us but they have overtaken us. Nana Akufo-Addo is committed to reversing the trend. Our case is not hopeless at all,” he stated.

Mr Duncan also called on senior citizens in the country to be hopeful as the country will sooner than later roll out sound policies to address their plight.

According to him, the aged having toiled over the years in advancing the country’s development should not be enduring the suffering they get subjected to in their quest to meet their needs.

Retirees he said should be treated as first-class citizens for they laboured for the country to get to its current level.

Previous Photo: Meet the 27-year-old man who has never had an erection
Next Thaddeus Sory’s final written address in the defence of Charlotte Osei 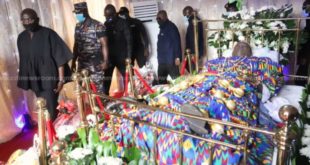