A Moroccan football fan has told Euronews how he was briefly detained in Russia during a World Cup football match and then told to leave the country after wearing a T-shirt criticising Fifa, the world’s governing football body.

Yassine Omairy, who is a Moroccan-American, had printed “Shame on you Fifa” T-shirts as he was angry about the refereeing decisions taken during Morocco’s match against Portugal last week.

He wore one to Morocco’s next game against Spain on Monday, but it didn’t go down too well with officials

The officials detained him and took away his passport, but then allowed him to watch the second half of the match.

He told Euronews that when he went to pick up his passport afterwards “they told me to leave the country as soon as possible. I will never forget this experience because I was treated unfairly and wrongly.”

On Facebook overnight he said he was happy to see that his Facebook video was “reaching out to different countries and translated to other languages.

Now I can say that our voice has been heard by many people and our message was delivered all over the world.This video is not just my voice… this video represents all the Moroccans around the world. God bless Morocco and Shame on you Fifa.”

Euronews said it had contacted Fifa for a response.

Sammy Gyamfi, the National Communication Officer of the NDC says but for the E-blocks built …

Relationship coach, Counselor Charlotte Oduro has made a very interesting revelation about pastors. Most at … 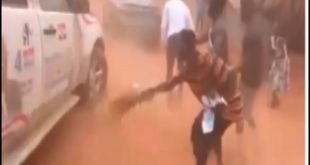 You would recall that we reported on John Mahama’s running mate, Prof. Jane Naana Opoku …