A 60 year old health facility has been abandoned and left to rot at Akokoamong in the Ejisu-Juaben municipal in the Ashanti region, making the entire community difficult to access healthcare as they have to travel far for medical attention, a situation affecting their socio-economic development. 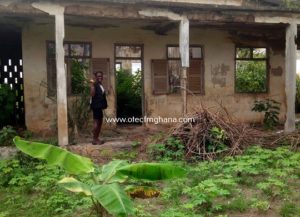 The facility, built by the Dutch in 1958, was completed in 1969 during reign of late Prime Minister Dr. Kofi Abrefa Busia, was converted to a Kindergarten school as successful heads of sates failed to equip the facility to start operation. 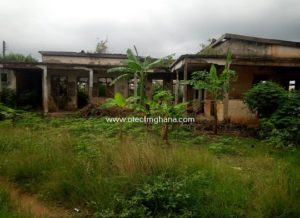 The Asantehene’s Siehene, Nana Akwasi Yeboah, on Wedneday, June 26, 2018, told Otec News’ Mabel Fosu and Beauty Fremah at Akokoamong that the school also collapsed for lack of logistics and teachers and have now been used as a refuse dumping site, occupied by weeds and abode of reptiles and criminals. 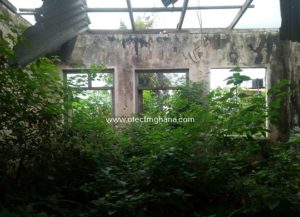 “The facility construction started way back in 1958 by the Dutch and completed in 1969 but was left idle when Dr. Busia was overthrown. The leaders at the time engaged the then Ejisu Council for total take over for the operation of the facility as at that time there was no health facility within the Ejisu Council, but to no avail,” he said.

Nana Akwasi Yeboah in his narration said “residents here find it difficult in accessing healthcare, the nearest health facility is KNUST Hospital, which is miles away from here, coupled with the poor road networks. In fact, the people here are suffering and how I wish this community can even get a CHIP compound here for pre-medical care.”

“All successive governments have used the abandoned facility as bait to get our votes, with the intention of completing it for operation but they have all disappointed us. We alerted the Municipal Assembly and Member of Parliament (MP) of the area, Hon. Owusu Aduomi but all falling into deaf ears. We will resist any attempt by political parties who may wish to campaign here for our votes, until the abandoned facility is brought back to life, enough is enough,” he concluded.