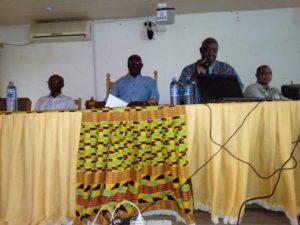 According to him, the project is in line with the Government flagship programmes “ planting for food and jobs as well as One District One Factory” to enhance in the existing fish and food stock in the communities and the country at large. 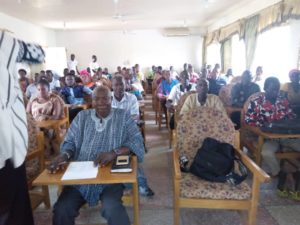 “Fish and Crop farming are component of Agriculture and our development partners have decided to extend their support and partnership spirit in the area of agricultural activities into the Krachi East Municipal with view to improve upon the life of the people” Hon. Patrick Jilimah stated.

“ Agriculture is the mainstay of the economy of Ghana and about 60% of the labour force are engaged in the agricultural sector hence, the launch of Integrated Aquaculture and Crops Production project to encourage the youth to desist from migrating elsewhere in search of non-existent jobs” he indicated.

According to him, 660 acres of land has been released by the chief of Wankaway, Nana Kwaku Chikpa and Gyasehene of Chunke traditional area to start the project.

“I will urge the people of Krachi East to take advantage of this opportunity and involve themselves in this Production particularly, the youth to reduce the rate of youth unemployment in the Municipality and the country at large” Hon. Patrick Jilimah admonished his people.

The Integrated Aquaculture and Crops Production project is sponsored by SkyFox Limited and Afram Plains Development Organization, a non- Governmental Organization (NGO) in collaboration with the Krachi East Municipal Assembly.

He added that, the people of Krachi East Municipal will continue to appreciate the efforts of their development partners such as APDO, World Vision International, USAID, UNICEF, Global Communities, Plan Ghana, SkyFox Limited and others who have partnered with the Assembly over the years and will continue to partner with it to develop their communities through the provision of educational facilities, Health facilities, Social amenities and other socio – economic infrastructure which aim at improving upon the living conditions of the people.

Hon. Jilimah therefore, commended the collaborative arrangement between APDO and SkyFox Limited to partner with interested aquaculture and crops production with their objectives of the project which include: Income generation, Employment generation, Food security, Poverty reduction, etc.

Speaking to Gateway FM’s Christiana Ativi, the Executive director of APDO Mr A.Y.O Modoc encouraged the women to involve themselves into the programme most especially, selling of the fish when harvested at least in each six months. He added that water from the fish ponds contains organic manure and will be used for veritable farming as well.

Mr. Patrick Apoya Executive director of SkyFox, explained to the media that currently, the programme is opened to some identified groups in the district but as time goes on individuals will be allow to involve themselves into it. He advised the people of Krachi East to invest into the project by buying shares from SkyFox Limited in other to change the perception about Africans being poor upon all the natural resources God has given us.

Previous Let us know your real concerns – Akufo-Addo to Togolese parties
Next Exclusive: Anas to attend ‘Who watches the watchman’ premiering