An Accra Human Rights Court has adjourned a case involving Two Ghanaians, and the Ministry of Communications over the Kelni/GVG contract to July 3.Justice Anthony Yeboah before adjourning the case in his chamber bemoaned a late receipt of process hence his inability to study the documents.Sara Asafu-Adjaye and Maximus Amertogoh want the Minister of Communications, the National Communications Authority, Ghana Revenue Authority, Attorney General, the Ghana Chamber of Telecommunications and the telecommunications networks to cease the traffic monitoring.The two are requesting from the court “an order of interlocutory injunction restraining the respondents, whether, by themselves, their servants, workmen, hirelings, agents, privies or any persons claiming under or through them, whosoever, described from implementing and operationalizing the Common Platform until the final determination of this suit.”In a related development, Justice Yeboah also adjourned the case between Citizen Ghana Movement, IMANI Ghana and government on the KELNI/GVG deal to the same date.He indicated there were no records of affidavit served in opposition to the parties.The two organizations are seeking an interlocutory order restraining government from implementing the common platform which will allow the monitoring of revenue accrued by telecommunication companies operating in the country.Making an appearance in court, Friday June 22 is the Minister of Communications, Ursula Owusu-Ekuful.Story by Sandra FrimpongGBCONLINE 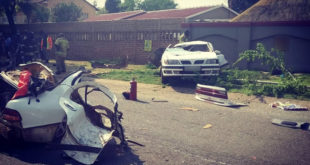 3 killed after car crashes into tree, splits in two